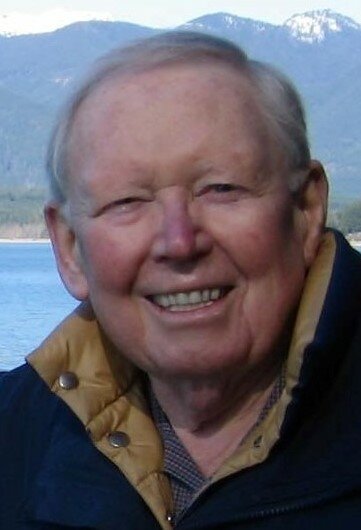 Denis John Curry, 87, of Olympia, Washington, passed away peacefully on August 12, 2022, at home with family by his side.

Denis was born on March 13, 1935, to Daniel Patrick Curry and Olga Charlotte Erland in Evanston, Illinois.  In 1948, the family moved to the Northwest in a camp trailer pulled by an old Desoto that needed work.  Two weeks later, they arrived in Burien, Washington.  The family’s last move was to Portland, Oregon, where Denis attended Franklin High School (Class of ’53).  There he played varsity football, and was student body vice- president.  He spent eight years in the U.S. Naval Reserves, training as a sonar man.  He then met Beverly, the love of his life, on a blind date arranged by friends.  That date led to a marriage lasting 65 years.

Denis was a graduate of Portland State University and, in 1960, obtained his Master of Arts in Political Science and Public Administration at the University of Arizona.  The young family then moved to Salem, Oregon, where Denis worked as a fiscal analyst in the Governor’s office, specializing in higher education.

In 1968, the family moved to Olympia, and Denis continued his career in higher education with the newly created State Council on Higher Education, and for the Council on Post Secondary Education.  In 1985, he started a consulting practice, which he later sold to MGT of America, managing their Northwest Regional Office in Olympia.  Denis retired in 2002 and continued to do consulting work during retirement.

Denis and Beverly spent much time and energy building a house on the water at beautiful Lake Cushman.  It was a place to swim, boat, and relax with family and friends.  He enjoyed golf, boating, and watching the Seahawks, the Sounders, and the Mariners.  Denis and Beverly travelled to Peoria each spring for Mariner Spring Training.  One of his fondest Mariner memories was the game he watched from the Owners’ Suite at Safeco Field.

Denis was a planner, always having ideas on what he would like to do next.  He enjoyed planning trips, so he and Beverly travelled in Europe, Australia, New Zealand, Russia, and China, which included a rare visit to Tibet.  After living in Honolulu for a year with his work, they returned each November for many years to spend time at their favorite San Souci Beach.  Early this year, Denis travelled twice to the Hawaii he enjoyed, and was planning another trip to see the Sony Open Golf Tournament in 2023.

Denis was a member of Lacey Rotary since 1970, a member of the Capitol Lake Improvement and Protection Association, and was involved in his neighborhood HOA.

Always the optimist, Denis continued to seek out treatment for the prostate cancer he valiantly fought for over 10 years.  He believed in the power of the mind and the power of positive thinking.

To send flowers to the family or plant a tree in memory of Denis Curry, please visit Tribute Store

Share Your Memory of
Denis
Upload Your Memory View All Memories
Be the first to upload a memory!
Share A Memory
Send Flowers