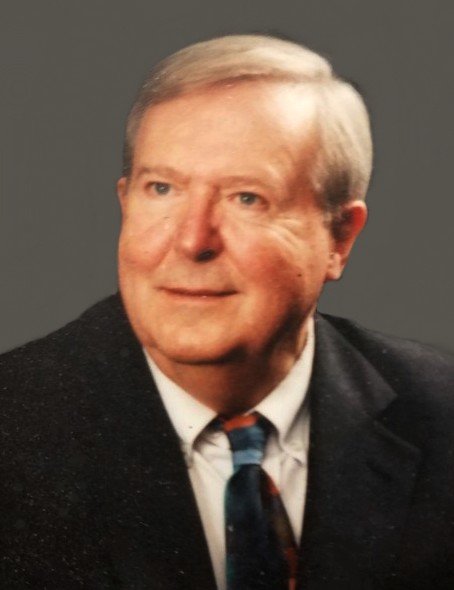 Obituary of Dale A. Spiegel Sr.

Dale’s parents, Jacob A. “Jake” Spiegel and Laura May Levi Spiegel, moved to Formoso, Kansas in 1930 from the country so their sons could attend “city school” rather than a one-room schoolhouse.  Dale recalled as a child straightening nails from the old house to be reused in rebuilding the house that is still in existence. Father and son were early recyclers! Dale recalled his father and Uncle Bill Spiegel going to auctions of farms in the Dustbowl Depression era where they assembled the core of the farms today, still operated by nephew, Steven. Dale also related staying home from WWII an extra year to help on the farm, which was a critical industry, before entering the Navy in 1944.

Dale returned to Kansas after an honorable discharge from the Navy. We note that he avoided swimming practice by playing the trumpet in the Navy band. Dale attended the University of Kansas with his brother Donald (now of California), then went on to obtain his law degree (Juris Doctor) in 1952. Dale and Don were blessed with younger brothers, Jack and Richard, both of whom predeceased Dale.

After marriage to Harriet Lee Easter of Abilene, Kansas, the newlyweds surveyed potential areas to settle in and practice law, selecting Emporia, Kansas, where involvement with the Democratic party led to Dale’s election to Probate Judge. Dale was active in politics and strongly supported Democratic candidates the rest of his life.

After losing Harriett in a car accident, Dale married and then was divorced from first Gene Ebert Pennington, and then Mary Foard. He and Mary have a daughter, Amy.

Dale married Pamela Wirhol in 1995, losing her to an illness in 2014. Through Pamela, Dale has stepdaughters, Brenda of Montana, and Shelley of Olympia.

Dale was a scholar and gentleman, often quoting others or asking: “Why curse the darkness when you can light a candle?” He strongly believed that everyone deserved the best legal defense they could get, and he fought the good fight. He was active in the Methodist church for many years, then attended other congregations as he aged, moving and formimg other bonds. Dale was a 32nd degree Mason and Shriner, past member of the Lions Club and Optimists, and was known to attend the VFW in Olympia.

Dale was blessed to be active to the end at the Lacey and Olympia Senior Centers, where he played bridge or pinochle almost daily for many years. He also played at Capital Place in Olympia, where he resided briefly in 2019 after moving from Lacey, Washington. He enjoyed the people and the interplay. He and his children cherished the many close friendships that he developed in the community.

Dale and Harriett are survived by four children, Dale Jr. of California, and Mark, Theresa and Lisa all of Colorado. He also leaves behind close-knit family relationships through Harriett.

The family suggests that each friend remember Dale in their own way or with the charity of their choice. Arrangements for a small family service will be planned at a future date. Thanks to all who have helped him for many years.  His smile and wit will be missed.

You may leave condolences and memories for the family by clicking the Condolence box to the left, or sending cards and letters to: The Family of Dale A. Spiegel c/o Mark Spiegel, PO Box 420, Boulder, CO 80306.