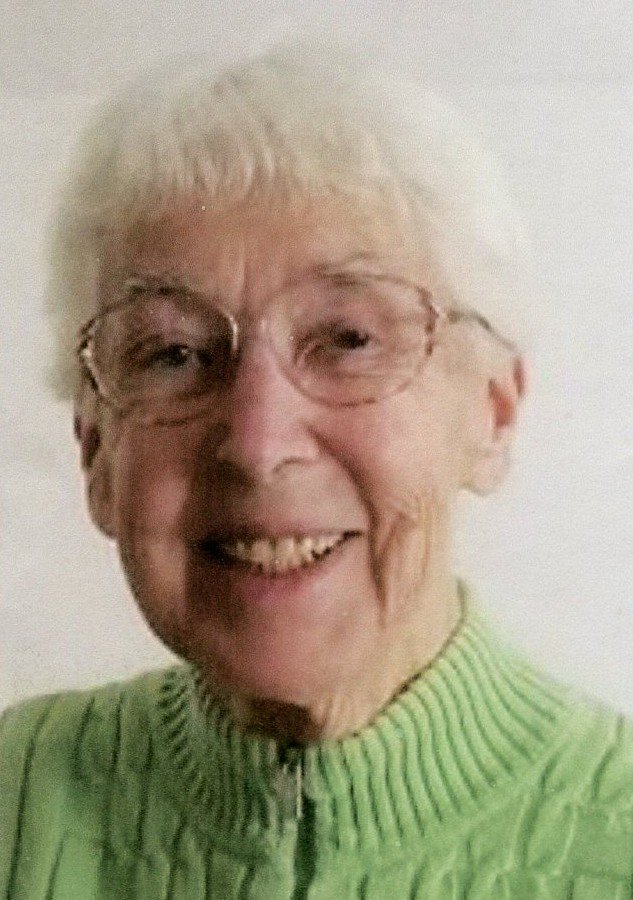 Barbara Jean Reynolds, 88, passed away September 19, 2019 at Garden Courte Memory Care Community in Olympia, Washington, after many years with Vascular Dementia. She is survived by her husband, Jack, of Olympia; children, Kate of Seattle, Tom/Kim of Colorado, and Nan/James of North Carolina; and six grandchildren.

Barb wrote the following life story many years ago:

Sister of four, wife of one, mother of three, mother-in-law of three, and grandmother of six.

I was born March 16, 1931 to Howard and Kate (Homar) Alexander in Ridgefield, Washington.

I grew up in Ridgefield, population about 350 at my birth, maybe 600+ when I graduated from high school. I spent grades 1 through 12 in same building. Ridgefield was a great place to grow up, where the “village” really did raise the children.

After graduation from CWCE (now Central Washington University), I taught school in Vancouver, Washington. I discovered I wanted to take all the children home with me – wanting to be a mother more than I wanted to be a teacher. A teacher friend introduced Jack and me and, a year and three months after our marriage, I became the mother of our own child, so put teaching on the back burner for 15 years. I was fortunate in being able to be a stay-at-home wife and mother. (Well, sort of at home, since after child number three was born, I started becoming involved in our church, First Christian in Vancouver, where Jack and I were married.) The ‘60s were an interesting time to be in leadership in the church.

From then until 1972 when we moved to Olympia, I was involved in all aspects of church life, local, district, and regional, including with United Ministries (UCC, Church of the Brethren and Disciples), which was started in our region during that time. I was very lucky to have some great mentors, who coaxed, prodded, taught, supported, and loved me along the way.

Before we knew we would be moving to Olympia, I had started back to school at Portland State College (now Portland University) to work towards a Master’s degree in Guidance and Counseling. After the move, I decided I needed to put that dream on hold and go back to work, with Jack’s blessing. Our children were getting older and would soon be college bound. The next 15 years, I did substitute teaching, directed the Thurston County Retired Senior Volunteer Program, worked at a counseling center as receptionist, bookkeeper and person growth group leader, and served as Administrative Assistant in the church office—not all at the same time.  Then, back to school at St. Martin’s, where I received a Master’s Degree in Community Psychology and Counseling. During this time, I also began leading parenting classes and eventually became the Director of Family Friends, setting up teaching classes, and leading support groups for parents and families. I retired in 1992.

Since then, I have volunteered in the community on the Board of Directors for Olympia Child Care Center, and lead support groups for grandparents, most recently for grandparents raising their grandchildren.

I have stayed involved in the life of the church during most of this time, and more since retirement. Being involved in our own local church and currently (1998-2004) serving as convener of the Regional Elders and of the Regional Pastor Relations Committee.

Being a part of this congregation is a joy in my life – playing the handbells, working in the yard and visiting with the people who walk by on the street, fellowshipping with friends, and more importantly, worshipping together and learning together more how to BE a child of God in our world during this time on earth.