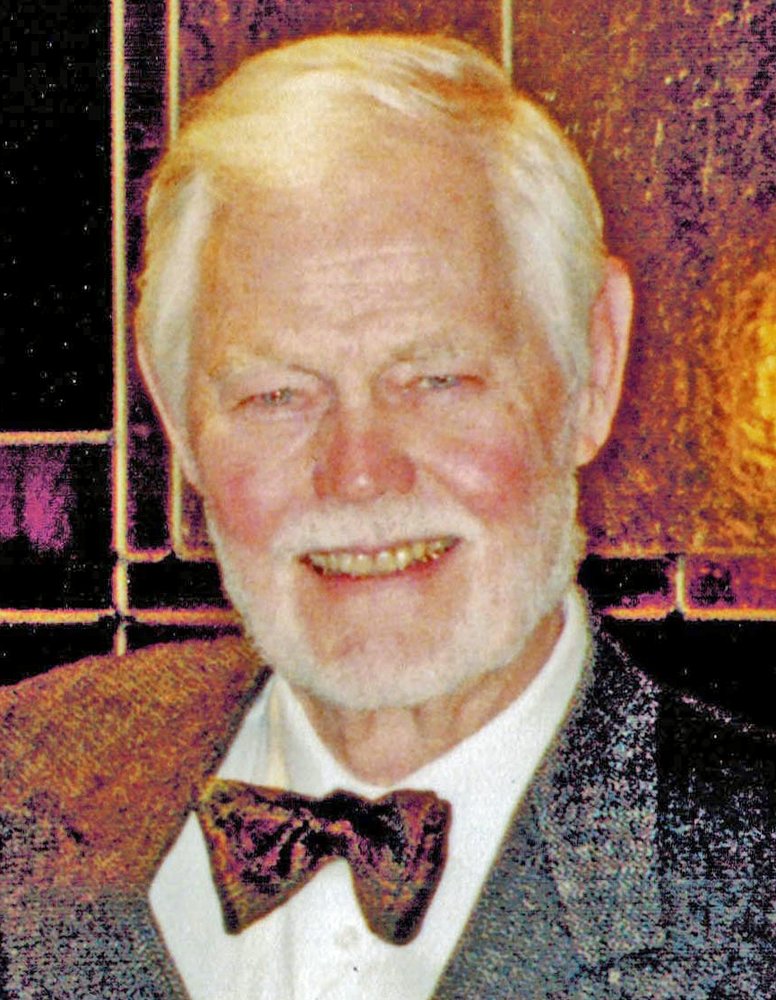 Alan died of a heart attack on July 28, 2019. He was 92. Death came as he read a mystery novel in bed. In the home he designed, on a bluff overlooking Puget Sound, north of Olympia. Barbara, his beloved wife of 67 years, was not by his side. She died in 2016. He missed her.

Democratic state legislator, chief clerk of the state House of Representatives, newspaper publisher, journalist, Congressional aide, athlete, husband, father, grandfather, friend. He was all of these. Colleagues recall his courtesy and calm leadership. His family remembers a gentle patriarch. All remember his bow ties.

Alan Craig Thompson was born May 17, 1927, in Geneva, Iowa. Population: 250. His father managed agricultural cooperatives. His mother once taught in a one-room schoolhouse. He had two sisters and two brothers. During the Depression the family moved to Fort Dodge, then Omaha, where Alan won acclaim as a high school sprinter.

In 1945, he joined the Navy, two months before WWII ended. After discharge the next year, he enrolled at the University of Nebraska at Lincoln. And again won acclaim, as a sprinter on the Cornhusker track team.

Following the lead of an admired elder brother, he studied journalism and covered sports for the Lincoln Star. Early in 1949, he attended a dinner hosted by a women’s journalism society. Its president—and emcee of the event—was a striking beauty named Barbara Rowland. Alan was entranced. They were soon dating. And soon engaged. Barbara graduated that spring with a journalism degree. The couple wed August 22, 1949, in Farnam, Nebraska, Barbara’s hometown.

The newlyweds moved to San Francisco. Barbara worked for an ad agency as Alan completed college at the University of California, Berkeley. He graduated in 1950 with a journalism degree. Then they returned to Nebraska. She worked for a newspaper, he worked for a radio station, then both worked for a telephone company. In 1954, the peripatetic couple moved to New York, where Alan edited a corporate magazine. Rowland, first of four sons, was born in 1955. The next year Alan’s employer transferred him to California.

But Alan and Barbara dreamed of another life. They wanted to publish their own newspaper. In 1958, they realized their dream, buying a weekly, the Wahkiakum County Eagle, in Cathlamet, Washington, a fishing and logging town on the Columbia River. Population: 600. They were soon reporting local news and making new friends. A second son, Sam, was born that year.

Their lives took a dramatic turn in 1960. That year Julia Butler Hansen—Cathlamet resident and pioneer woman state legislator, first elected in 1938—was elected to Congress. A friend encouraged Alan to ask her if she would hire him as her aide. She would.

And the Thompsons moved east, to a home near Washington, DC. On January 20, 1961, Alan accompanied Hansen and her young son David to John F. Kennedy’s inauguration. There they heard the young president’s inspiring words: “Ask not what your county can do for you . . .” Hansen went on to serve 14 years in Congress, eventually chairing a powerful subcommittee overseeing the Department of the Interior.

Alan and Barbara’s third son, James, was born in 1961. Next year the family returned to Cathlamet and resumed publishing the Eagle. In 1963, they moved again, this time to Castle Rock, Washington, a logging town in the Cascade foothills. Population: 1500. The couple had purchased another weekly, the Cowlitz County Advocate. They would publish the Advocate for three decades. All of their sons—including Jonathan, born in 1968—worked at the family enterprise.

In 1964, Congresswoman Hansen prodded her former aide to run for the state legislature, against a Republican incumbent in a district encompassing Wahkiakum and Cowlitz counties. Alan did so, and—in a race drawing more than 20,000 votes—defeated the incumbent by 15 ballots. Thus began a long legislative career. Seventeen years in the House, four years in the Senate. He became a respected leader, known for bipartisanship. And he played a key role in enacting landmark legislation.

Education. In 1977, Alan helped negotiate the Washington Basic Education Act, boosting state oversight and funding for K-12 schools to meet its state constitutional “paramount duty” to educate schoolchildren. He also had a major impact on higher education, sponsoring a bond measure approved by voters in 1972 that pumped millions of dollars into the state community college system. Lower Columbia College in Longview recognized his contribution by naming its library for him.

In 1976, fellow Democrats elected Alan House majority leader. In 1982, after an incumbent died, he was appointed to the Senate. Four years later, he resigned to become chief clerk of the House, managing over 200 legislative support staff. He retired in 1993.

Meanwhile, Barbara managed the Advocate and participated in civic affairs, including serving as president of the Castle Rock chamber of commerce. In 1992, the couple sold the newspaper and moved to Olympia. The Advocate ceased publishing in 1999. But the Wahkiakum County Eagle still goes strong. (Please support it!)

Share Your Memory of
Alan
Upload Your Memory View All Memories
Be the first to upload a memory!
Share A Memory
Send Flowers