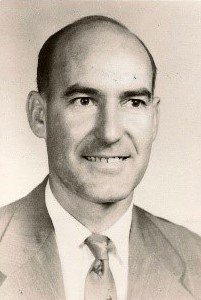 Grady Floy Williams was born October 9, 1922 in Lone Oak, Texas, and died August 2, 2019 in Seattle, Washington, at the age of 96.  He was the eighth of ten children born to John Lorenzo Wyatt Williams and Flora Leta Smith Williams. He served as a Navy Radioman in WWII, in the Pacific Theater and post-war Japan.

The valedictorian of his Lone Oak High School class, he studied dairy production at Oklahoma A&M, in Stillwater, Oklahoma, earning honors as the outstanding dairy student of his class, and elected to Phi Sigma Theta National Honor Society. In 1960, he was the first student at Oklahoma State University to be awarded a Ph.D. in Dairy Production, and was elected to Sigma Xi, National Scientific Research Honor Society.

He worked for Kansas State University as a dairy scientist in Mound Valley, Kansas until 1965. That year he moved to Puyallup, Washington, to become an Extension Dairy Scientist for Washington State University. During his tenure, Washington State was credited with having the best area dairy agent program in the U.S., and Washington led the nation in milk production per cow for several years. After co-founding the Western Extension Dairy Specialists group, milk production increased for all western states.

To send flowers to the family or plant a tree in memory of Grady Williams, please visit Tribute Store
Friday
9
August

Share Your Memory of
Grady
Upload Your Memory View All Memories
Be the first to upload a memory!
Share A Memory
Send Flowers