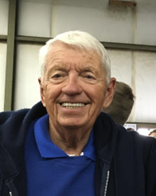 Ed loved teaching.  After beginning his teaching career in Southern California, he worked for the Rochester and Olympia School Districts.  He taught special education at Capital High School from 1976 to 1999.  He designed and implemented programs to promote interaction and understanding among the students in special education, the student body, and the public.  In all, he was a teacher for 39 years.

Ed loved with his whole heart.  He had one younger sister, Connie LaFond.  He married Carol Jeffers in 1961.  They had two daughters, Suzanne (Tom) and Chrisi (Bryon); five grandchildren, Ryan, Ashley (Brandon), Abby, Emma (Abel), and Matt; and one great-grandchild, Alexandra.  He was a caregiver for Carol for 16 years until he lost her to dementia in 2014.  Following her death, he found love and companionship with Leta Norton.

Ed loved playing sports.  He played football (quarterback and halfback), basketball, and baseball (first base) at Olympia High.  He played on fastpitch teams in Olympia and then moved on to coaching.  He coached girls fastpitch when his girls were young, and then at Capital High School, where his team won four state championship titles in five years.  In his later years, he fell in love with playing pickleball.  He was a fan of the UW Huskies, the Seattle Mariners, and the Seattle Seahawks.

Ed loved the sunshine.  He and Carol retired to Palm Desert, California, in 2000.  He loved his life in the desert!  Favorite activities included sitting by Pool 4, organizing pool parties, listening to his radio on the patio under his grapefruit tree, playing and teaching pickleball, chatting with neighbors, hosting Bunco parties, and dancing and singing at events at the clubhouse.  His friends at Deep Canyon Tennis Club were important to him.  Suzanne’s family loved visiting him in the desert and believe that calls of “Papa, watch me!” are still echoing throughout the DCTC complex.

Ed loved nicknames.  To us, he was known as Dad, Papa, Papa Eddie, Papa Eddie Leroy, Eddiekins, and Eddie.  To him, we were known as Rosy, Blondie, Pooh, Dog Lips, and Sweet Lips.  No matter what he was called, he was our favorite person!

Ed’s dementia brought him home to Olympia in 2020.  His family was fortunate to spend his last two years with him, going on drives, visiting friends, getting chocolate milkshakes, and sitting in the sunshine.  Ed is survived by all those who love him and will remember him each day.

To send flowers to the family or plant a tree in memory of Edwin Thietje, please visit Tribute Store

Share Your Memory of
Edwin
Upload Your Memory View All Memories
Be the first to upload a memory!
Share A Memory
Send Flowers