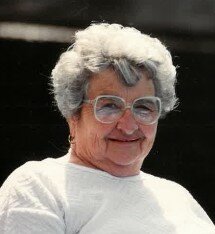 She is survived by her daughter, Cheryl Fox Adams of Olympia; granddaughter, Angela K. Townsend of Oakville, Washington; great-grandsons, Dalten J. Hansen-White and Dawsen C. Hansen-Todd, both of Olympia; and sister, Rose Bickel of Cashmere, Washington.  She was predeceased by both husbands; and granddaughter, Susan C. Hansen (June 10, 1970 – August 27, 1987).

A graveside service will be held at Icicle Cemetery in Leavenworth at a date and time to be determined.

To send flowers to the family or plant a tree in memory of Doris Fox, please visit Tribute Store

Share Your Memory of
Doris
Upload Your Memory View All Memories
Be the first to upload a memory!
Share A Memory
Send Flowers