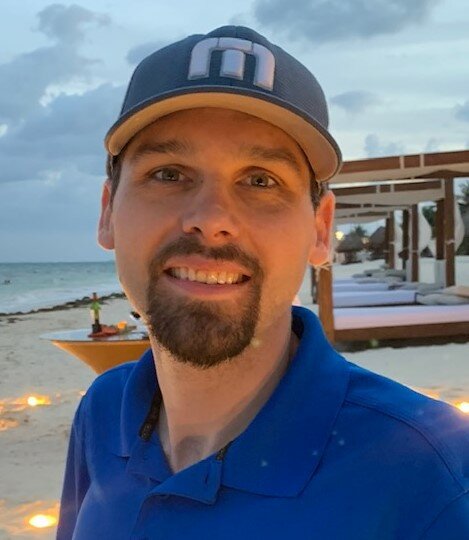 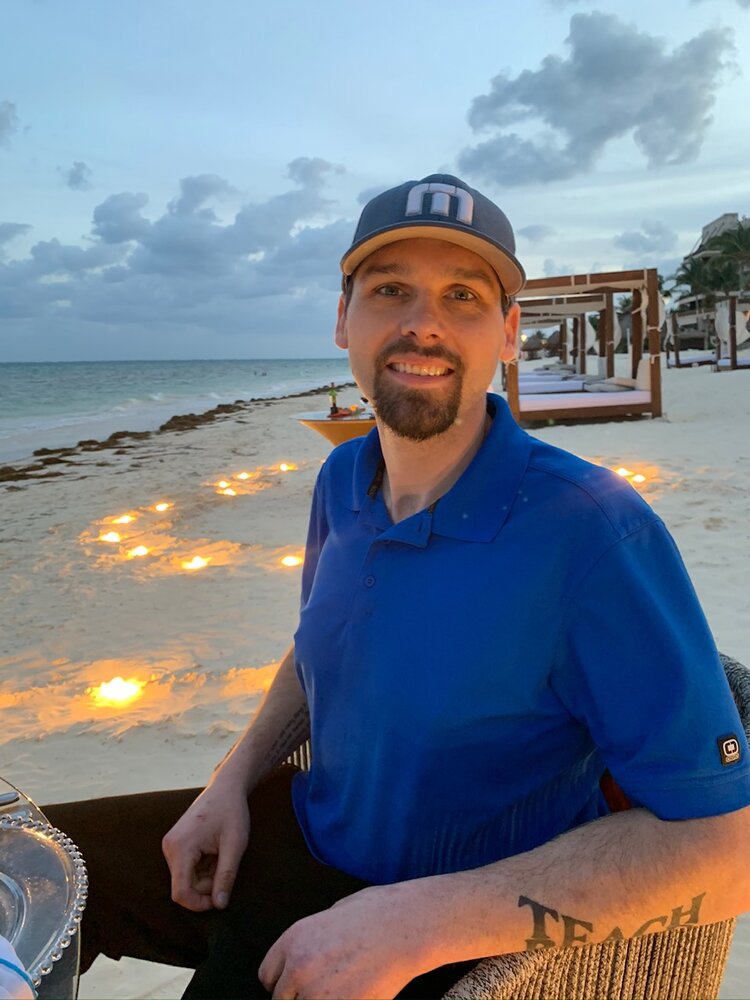 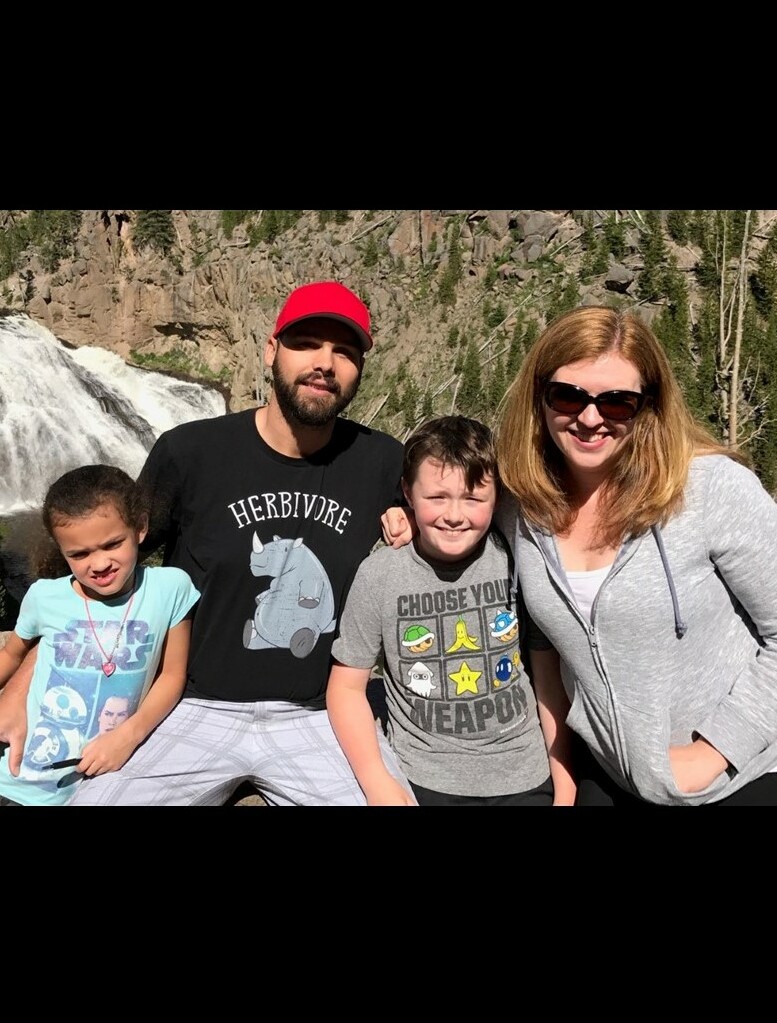 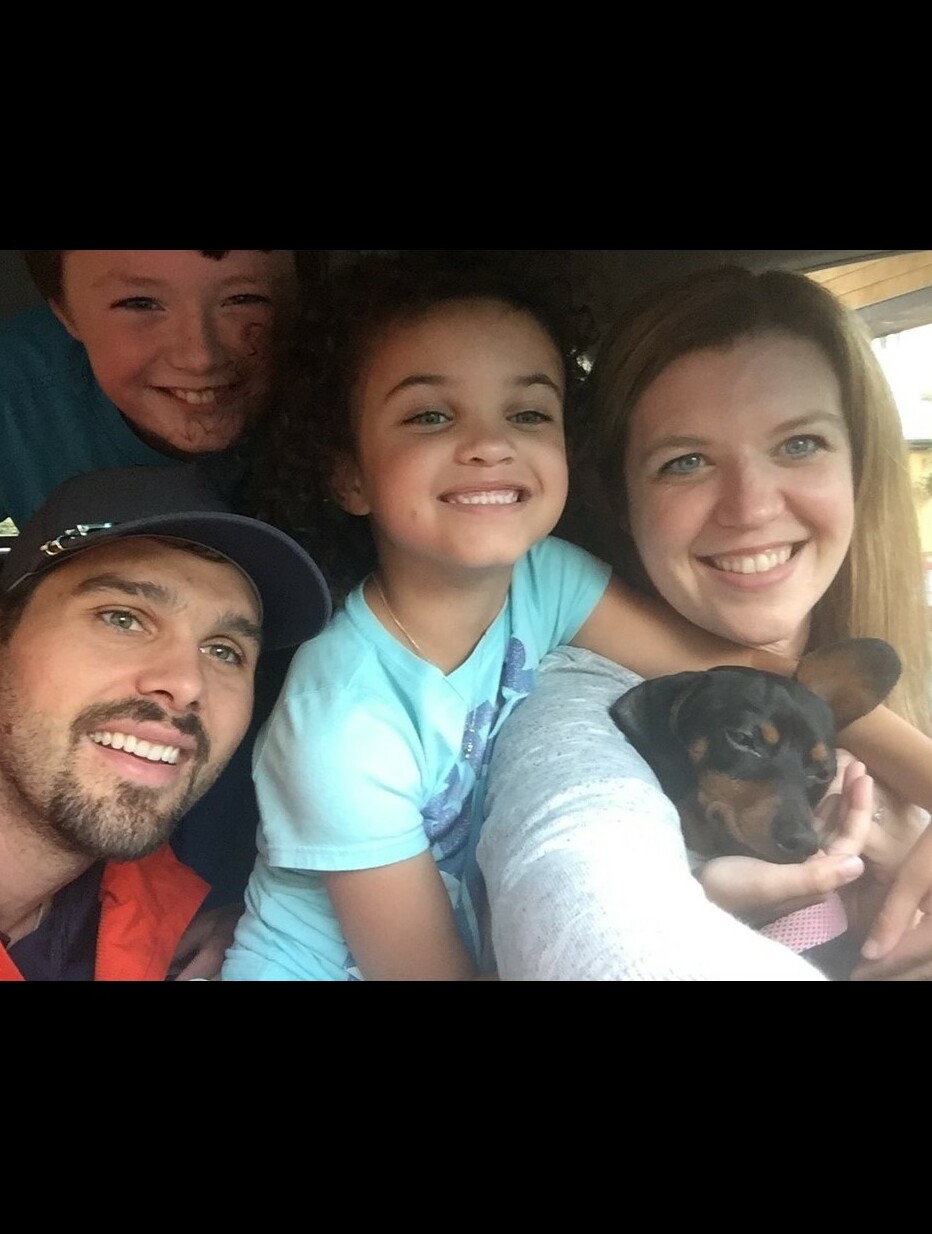 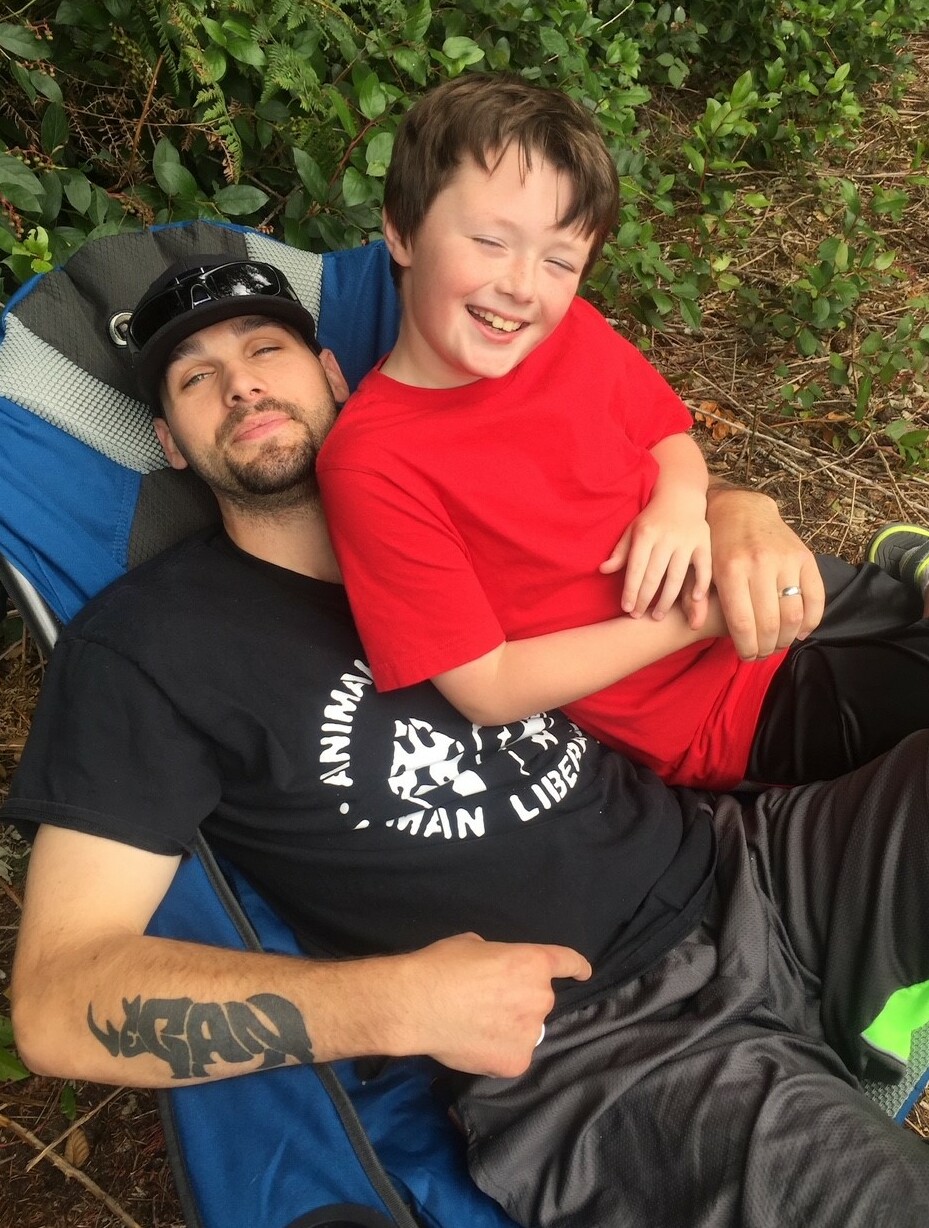 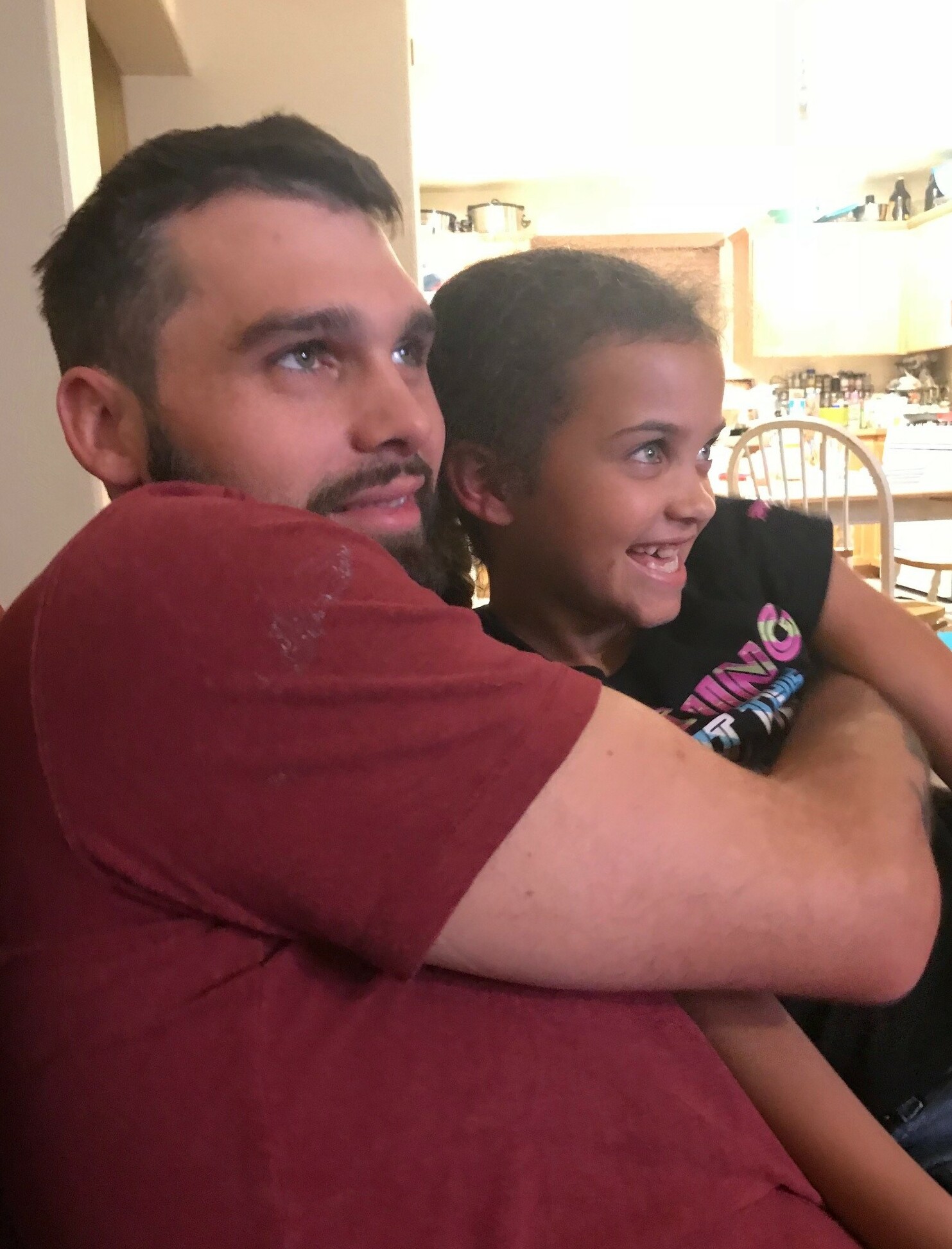 Elijah David “Eli” Pearson, age 39, died unexpectedly on April 15, 2022, in Olympia, Washington. Eli was born on November 19, 1982, in Seattle, Washington, and was the only child of David Kenneth Pearson and Diane Stone Pearson.

Eli grew up on four-plus acres in Shelton in an ever-evolving structure that eventually became the Pearson family home. Until his parents connected to city power, Eli fired up the generator each morning and shivered under his covers while he waited for the house to warm up, a parable he often shared with his children when they cried over little things, like picking up toys.

From a young age, Eli was a thrill-seeking adventurer. He was a happy baby and a precocious, curious toddler who liked to wield hammers and stick forks where they didn’t belong. As a kid, he spent his days exploring the woods with his dog, Sid. He also loved to play outside with his friends, shoot bb guns, and find ways to circumvent authority. Eli’s sense of humor and charisma gave him the unique ability to make friends in any social circle, and he drew people in with his intelligence, warmth, and quick wit.

Eli had a strong work ethic from a very young age. He started working when he was only 14, learned many carpentry trades (beginning with drywall), and excelled at design and architecture. As a teenager, Eli liked to party; but he also enjoyed throwing ceramic pots and cooking. He approached everything he did with his signature, creative flair, and he never did anything half-assed.

Eli joined a junior bowling league when he was 12 and continued to bowl throughout his life; his high score was 289. He had incredible aim, which served him just as well when he was bowling strikes as it did when he was hammering nails.

Eli did not graduate high school with his peers (because who would want to take PE all day to get the required credits?), but he later obtained both his high school diploma and three associate degrees from SPSCC.

Eli met his wife, Rayne, in April 2005 at a house party, where he impressed her with what he later confessed was false information about crown molding. Rayne and Eli were married (the first time) on Eli’s birthday in 2006, and their son, Evan, was born in May 2007. Rayne and Eli divorced in June 2009, then remarried on Evan’s birthday in 2011, after the birth of their daughter, Vanessa.

Eli’s favorite thing to do was take family vacations. The Pearsons traveled to Mexico, Hawaii, Colorado, and Canada, and made multiple trips to Disneyland, Las Vegas, and LA. They also frequently took short road trips to Portland, Seattle, Eugene, and Leavenworth, and enjoyed longer minivan excursions to Idaho, Montana, and Wyoming.

Eli loved golf and had the opportunity to play at many famous courses throughout North America. His favorite local courses included Chamber’s Bay and Salish Cliffs. Eli also enjoyed roller coasters, riding jet skis and quads, camping, playing pool, playing poker, and going to concerts and shows (Cirque du Soleil was a family favorite). Believe it or not, he also loved the opera.

Eli owned a residential and commercial construction business, and he prided himself on guaranteeing his work and ensuring his customers were happy. Eli had an eye for design and architecture and a mind for engineering, which made him an exceptional carpenter. Eli’s legacy is preserved through his work, which can be found all over Western Washington in many family homes and commercial buildings, including Olympia City Hall (specifically, the soffits in the lobby). Eli could fix absolutely anything, had a knack for finding creative solutions to difficult problems, and was the epitome of “handy.” Chances are that if you knew Eli, you learned something from him. He had a wealth of knowledge and skills that he shared freely with others, whether it was how to install a light fixture, how to fry tofu, or how to find a deal on vacation packages.

Eli had strong convictions about equity and total liberation for all beings. He was an ethical vegan, vocally antiracist and feminist, and always sought to challenge and dismantle oppressive systems. Eli had a strong a sense of loyalty to those he loved, and a remarkable ability to forgive. Family was the most important thing to Eli, particularly his kids. Making memories with Evan and Vanessa was his favorite way to spend time, and he made sure to tell them that he loved them many times a day.

In lieu of flowers, contributions to a memorial fund for Evan’s and Vanessa’s college education can be sent via PayPal to @EvanessaCollegeFund, or by mail to Deborah Moore or Jamie Moore at P.O. Box 4385, Tumwater, WA 98501.

To send flowers to the family or plant a tree in memory of Elijah Pearson, please visit Tribute Store

Share Your Memory of
Elijah
Upload Your Memory View All Memories
Be the first to upload a memory!
Share A Memory
Send Flowers