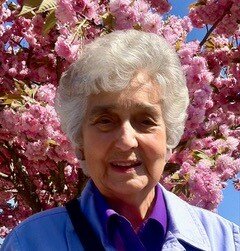 Betty Virginia Nickerson, formerly of Narragansett, Rhode Island, died on April 12, 2022, in Olympia, Washington. She was married to the late Robert A. Nickerson, her husband of 65 years.

Betty was born in Providence, Rhode Island, to Evylyn (Bagley) and Charles I. Moss on June 19, 1928.  She graduated from Classical High School in Providence and, from 1946 to1950, worked at the Rhode Island Hospital Trust Co. as bookkeeper and later supervisor of the Check Master Department.

She began organ studies at age 13 and continued with teacher Ethel F. Bird, FTCL for the next nine years. At age 14, she acquired her first position as a summer organist at the Methodist Tabernacle Church, Providence, where she was a member.  At age 18, she became the organist and choir director for the church, having had experience as a substitute organist for several denominations in the city.

On September 16, 1950, Betty married Robert A. Nickerson. They made their home in South Kingstown, Rhode Island, later moving to Narragansett.  In October 1950, she began her career as organist and choir director of Peace Dale Congregational Church, United Church of Christ, in Peace Dale, Rhode Island. Her continued length of service there was 39 years; she retired in 1989.  While there, she started a Hand Bell Choir that she directed for 15 years until retirement. Her church musician’s career continued for the next 15 years as she served as an interim musician or substitute in over 30 churches throughout the cities and towns of Rhode Island, including a year at the Peace Dale Church as an interim, bringing her service there to 40 years.

Betty was a member of The American Guild of Organists and served as Secretary, Sub-Dean and Dean of the Rhode Island Chapter, as well as Rhode Island State Chairperson. She earned the Choir Master’s Certificate in 1973. In 1985, Betty co-chaired the Region I American Guild of Organists’ convention held in Providence. She was co-chairperson for the Chapter’s 50th Anniversary Celebration held at Grace Episcopal Church, Providence.

In January 2005, Betty and her husband moved to Olympia, Washington, where they became active members at The United Churches of Olympia. Betty served on the Stewardship Ministry and the Caring Friends Ministry. She became a member of the Olympia Symphony Guild, serving as chair of the scholarship committee for high school seniors for five years.

A memorial service will be held in Rhode Island at a later date.

To send flowers to the family or plant a tree in memory of Betty Nickerson, please visit Tribute Store