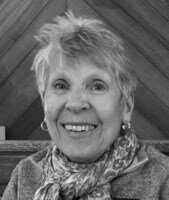 Marlys Crabs took her final strides on Friday, January 21, 2022, doing what she loved on her morning walk at 90 years young.

Growing up in Puyallup, Washington, with parents George and Stella, brother Bob, and several relatives, Marlys had good, clean fun as her friend put it. She was bright and driven from an early start, blossoming from the love of a happy home. Bob (brother rat) recalls Marlys (stinky sister) as being a super achiever and crying the one time she received a B grade!

Marlys received a degree in music from UPS, spending much quality time with her piano, cello, and stage productions. This is where Jack Crabs, in the audience, commented to his friend, "That's the woman I'm going to marry."

Marlys Stave and Jack Crabs did marry on February 6, 1953. Together they survived and thrived for 61 years, raising five children, Dean, Russ, Karl, Sara, Lia, with abundant love, hard work, and sense of adventure.

While managing our family, Mom spent much time cooking delicious meals, whisking around the house in a continuous cycle of cleaning, blasting KING-FM in the kitchen, while pursuing her passions of piano, learning French, and hiking. She was devoted to her subjects and people. Sunday meals with grandparents and extended family were a devout tradition. Eventually they brought sweet Grandma Stella into our home during her final years.

When times were not so rosy, Marlys was a strong individual with quiet resolve. She rarely yelled or lost her temper, which helped hold together our rambunctious family through the years. Perhaps coping via ambition, Marlys obtained a Master's in Education from UPS in 1982, practicing as a counselor for a time.

Jack and Marlys made the most of their time as their kids moved on, traveling, trying new recipes, while enjoying a martini and their famous laughter with whomever might be in their company.

Marlys was at Jack's side through his illness and passing in 2014.

She rekindled a friendship with Don, whom they had both known for many years. Marlys and Don renewed their prescription for the vitamins of life and enjoyed a resurge of fun and adventure in their 80s-90s, dancing, kayaking, planning getaways, and nice conversations until the very end.

Marlys suffered a severe stroke in 2017, which took away her ability to do many of the things she loved. She would also have to battle aphasia, which scrambled the meaning and processing of words expressively and receptively. At 86, Marlys was a model comeback. Her determination to get better restored her physically in short time. Her brain would function differently but her capacity to make new connections and continuously strive to improve was an inspiration for all of us around her. Marlys always focused on what she could do, not that which she was unable.

For four and half years, Marlys had a team of caregivers who were vital to her situation. They strived to give her the independence she strongly desired, while making sure she and her home were well cared for. We are forever grateful to those who became our pseudo-family.  Remaining in her home was a blessing. Being surrounded by wonderful harbor neighbors and nature, Marlys was always generous with her thanks and gratitude.

She laid her beautiful, beloved daughter Sara to rest just five days before she died. She traveled to Boulder, and unwavering summoned all her strength to unite her family in a way that only she could do.

With a twinkle in her eyes and concern for others, Marlys never lost her can-do spirit. She was always moving towards the next, best step.

She would enjoy being remembered with a favorite musical piece, a smile, and good drink in hand.

Her love will forever remain in our hearts.

To send flowers to the family or plant a tree in memory of Marlys Crabs, please visit Tribute Store

Share Your Memory of
Marlys
Upload Your Memory View All Memories
Be the first to upload a memory!
Share A Memory
Send Flowers