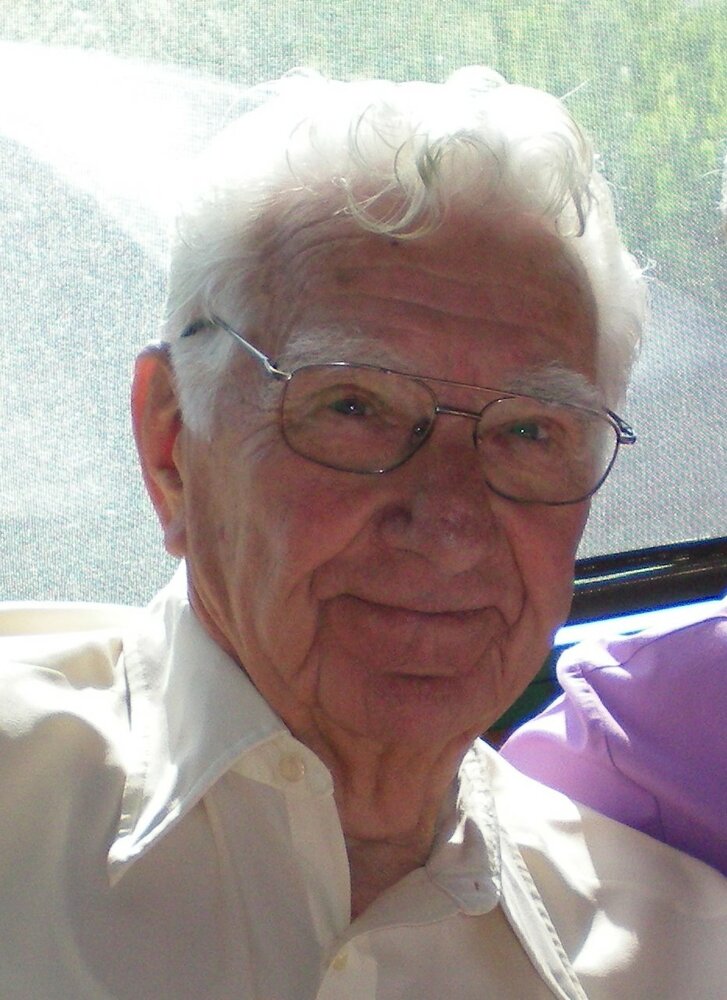 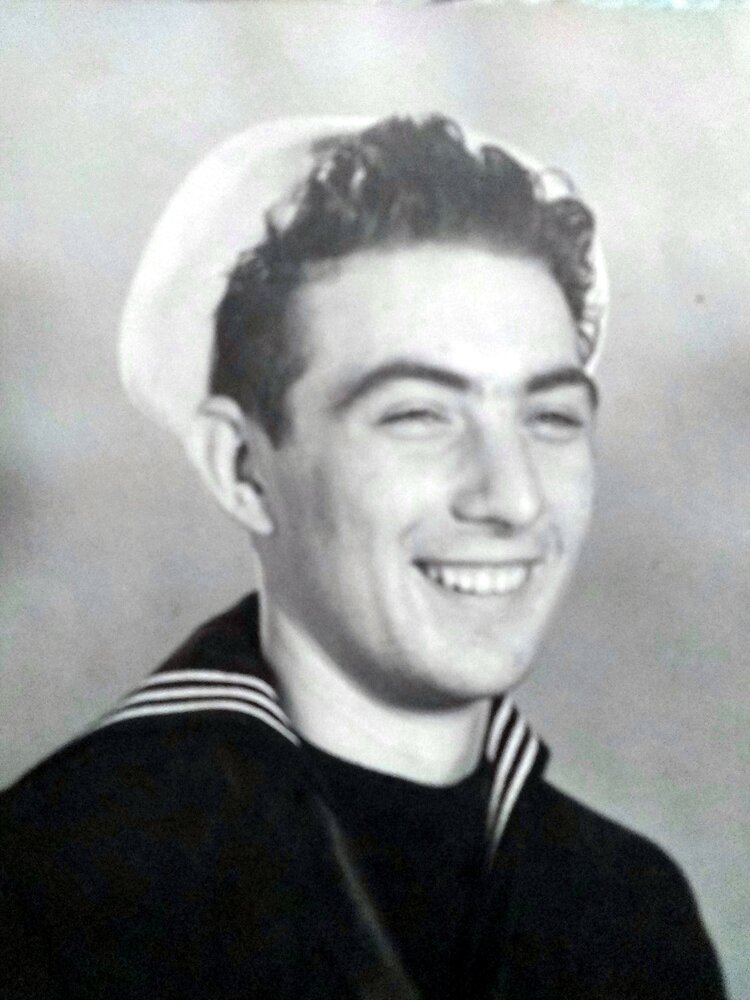 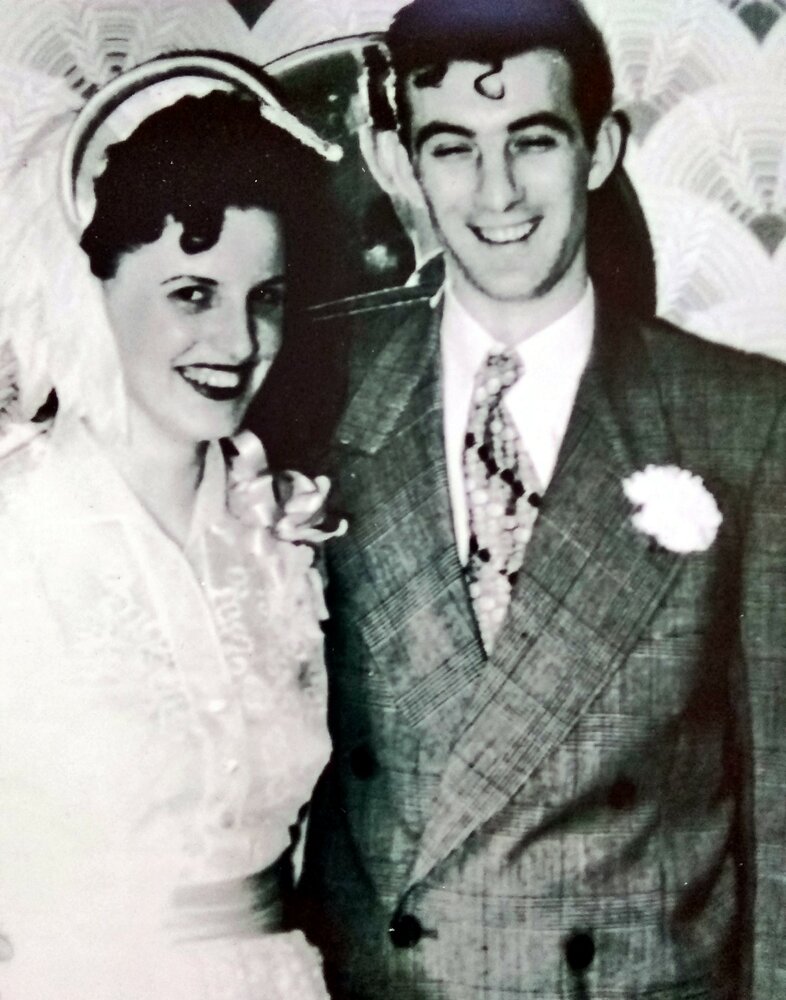 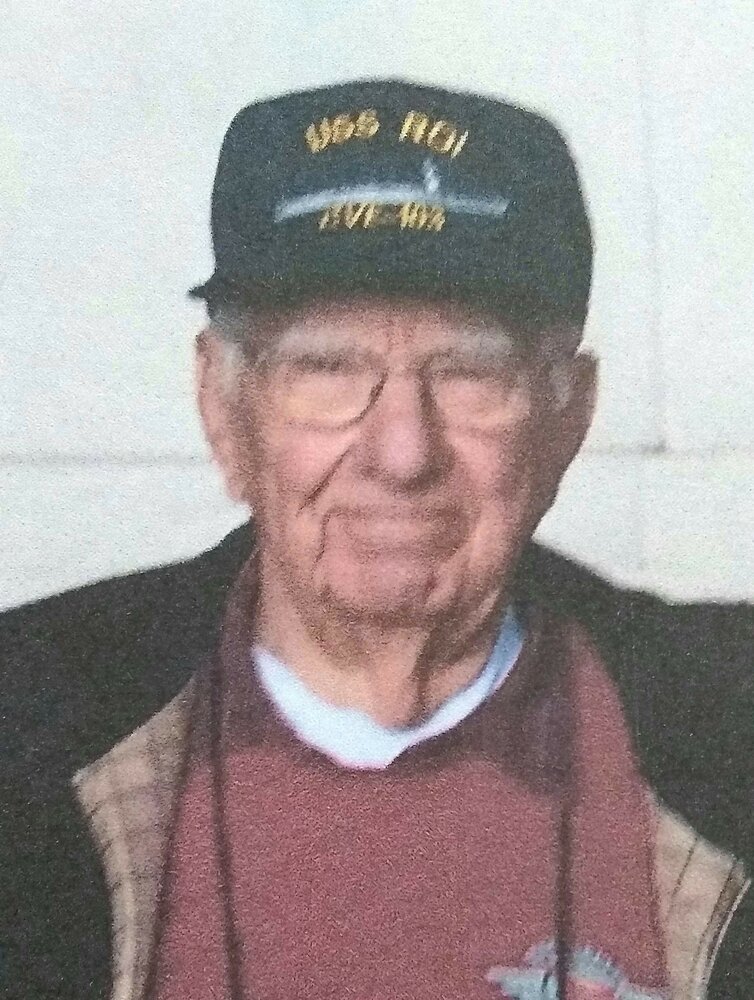 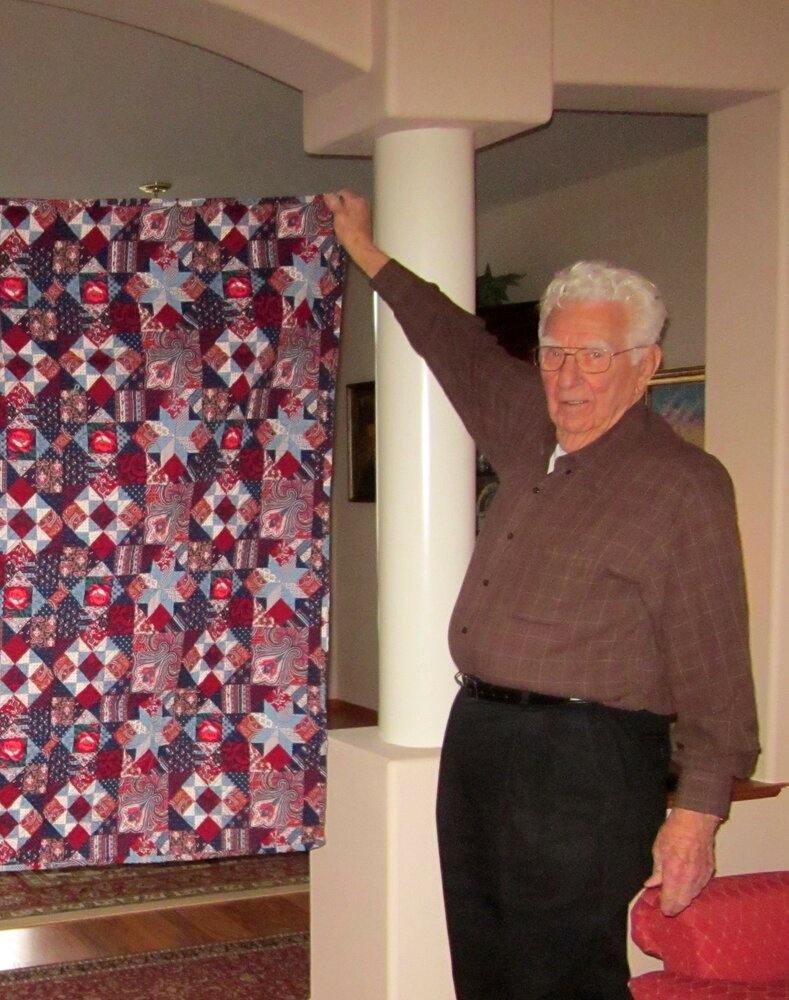 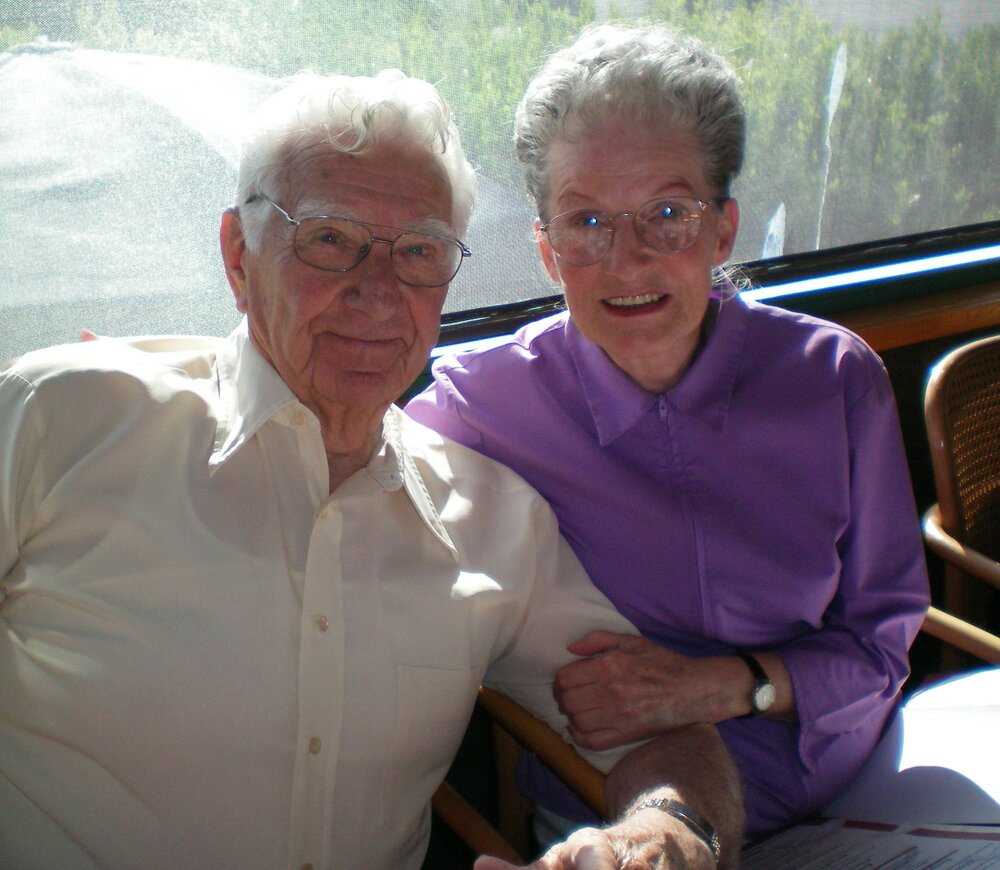 Disclaimer: Our father asked not to have an obituary. He did not seek to be memorialized or to be buried with any fanfare.This remembrance of him, by his daughters, was encouraged by our uncles, Ed and Ted Thomas. Thank you, Uncle Ed and Uncle Ted, for insisting we do this.

Elmer Wallace Gentry passed away January 18, 2022, in Olympia, Washington. The eldest child of Roy and Margaret Wilson Gentry, Elmer was born October 6, 1926, in Goldendale, Washington, and was the apple of his family’s eyes.

Over the years, Elmer’s family grew to include his brothers Wilbur and Kenneth, both of whom preceded him in death, and his surviving sister, Judith (Blaine).

In addition to his sister, Elmer is survived by his wife of 72+ years, Donna (Thomas) Gentry; daughters, Arlene Combs and Sandra Giraudeau; six grandchildren; 11 great-grandchildren; three brothers-in-law, their wives, and families; his one remaining cousin, Sam Patching; and numerous nieces and nephews and their families.

Our Father’s obituary has been a difficult task to write, not because of our grief, which is immense, but because how do you begin to describe a life as rich, varied, and well-lived as his?

Dad was fortunate to come from a large, warm, hard-working, fun-loving extended family with many grandparents, aunts, uncles, and cousins.

He also was fortunate to spend a lot of time with his maternal grandparents, Albert and Clora Wilson, at their watermelon farm in Hermiston, Oregon. Dad’s love of story telling and humor was a hallmark of his grandparents' personalities and rubbed off on Dad. Dad even looked a lot like his grandpa Wilson, and, in his later years, had the same beautiful full head of silver-white hair as his grandpa, although Dad’s hair, to the end, had a few curls in it.

He spent his childhood on the family farm in the Goldendale/Yakima area of Eastern Washington, then in Western Washington at Willow Grove by the Columbia River, and finally in Longview.

Farm work was tough back then. Dad was proud of his ability to work hard and help his parents on the farm, but he also was full of mischief and daring; and had many hilarious escapades and grand adventures, often with his cousin, accomplice, and life-long dearest friend, Jack See. We never tired of Dad regaling us with the stories of his family, his childhood, his time in the Navy, or his experiences during his many years on the road, driving trucks.

Part of the Greatest Generation, he grew up during the Great Depression, when hard work, self-discipline, self-sufficiency, and sacrifice were core values and were demanded by the times. That strong work ethic stayed with him all of his life and became an integral part of who he was, and what he taught to his two daughters.

When Pearl Harbor was bombed in 1941, Dad couldn’t wait to join the war effort. As soon as he turned 17 years old in 1943, he asked his father to sign a permission form for him to enlist in the Navy, the hardest thing his father ever had to do. After basic training, he was assigned to the USS Roi - CVE103, a Casablanca-class escort aircraft carrier that served in the Pacific theatre of operations. Dad was a Quartermaster. He steered the ship and assisted in navigation. One special memory of his Navy years included the regular letters he received from his faithful friend and cousin, Norma Patching. Dad never forgot her letters and was always grateful for them. He treasured the memory of occasional shore leaves with his cousin, Jack, and crossing the equator in the southern Pacific Ocean, ceremoniously passing from a Pollywog to a Shellback, an honored maritime tradition! He kept most of his memories from the service on the lighter side for the benefit of his daughters, but one that always haunted him was the day in November 1944, when he witnessed the shocking tragic explosion of the USS Mount Hood, an ammunition ship, laying at anchor in Paupua, New Guinea, with all but 18 of her crew aboard. He often thought about the men lost on that ship and their families.

After the war, he came home to Longview, where he met and married Donna Thomas, the love of his life, and settled down to work and raise a family. He drove logging trucks early on, heavily loaded, careening down narrow logging roads; then spent 30+ years driving big-rigs across multiple states, priding himself on his reputation as one of the best in his field and was often called upon for transporting dangerous, delicate, or special cargo. During those years, truckers were often the first ones to come upon an accident. More than once, Dad saved lives in those instances, called for help on his CB radio, or comforted someone in their last living moments. We were so proud of him for being a real, live super hero to people in those times.

He traveled to many parts of the U.S., but the last 10 years of his career were in Alaska, driving between Fairbanks and Valdez at Prudhoe Bay as one of the ice road truckers, hauling supplies and equipment for the Alaska oil pipeline, working with Lynden Transport with his own truck. Dad always had a love of trucks, boats, and airplanes, as well as the great outdoors and wildlife. In Northern Alaska, he saw every type of wild animal, glaciers, the Northern Lights, and even drove his huge truck across the frozen Yukon River!

His expert storytelling came in handy when telling about Alaska, the great last frontier. His stories of his Alaska experiences were filled with close calls, colorful characters, harrowing adventures, camaraderie and the close friendships of people who depended on one another for survival. Being one of the oldest truckers there, the others called him Grandpa, which he enjoyed, but no one ever doubted his skills. He was proud to be chosen to transport the multi-million dollar, enormous computer equipment that, last we knew, still measures the Alaska pipeline crude oil output.

When he retired in 1984 and came home, he and wife Donna spent their time together, working on various projects and enjoying socializing with family members and friends. Although they had dreamed of traveling frequently during retirement, both Elmer and Donna began to experience significant health problems that curtailed their travel opportunities. Despite the changes in their retirement plans, Dad never lost his smile, his sense of humor, the ability to tell a story or a joke, or to just be delighted to meet people and talk to folks wherever he went. Like his parents and siblings, Dad never met a stranger. He would strike up a conversation with men or women of all ages. Even little children and babies were drawn to his friendly face, infectious laugh, and gentle mannerisms. He was mistaken by little ones on more than one occasion for their own grandpas. Dad had an especially warm spot in his heart for those little ones, just as he did for three special great-nieces/nephew (Emily, Grace, Lucas) he fondly referred to as the Three Musketeers, before their youngest sibling (Lilyanna) was born.

Dad also loved music, having grown up in a family that loved to sing, dance, and play instruments. Dad played the harmonica, while his uncle Roger Patching played the fiddle, his cousin Norma played the piano, and the rest of them would sing. Our favorite piece as children was when he would make his big special chromatic harmonica “make a train”! He could make that harmonica sound like an old locomotive as it started up, huffing and puffing as it built up steam, going faster and faster until he broke out in a rousing rendition of the “Wabash Cannonball”! It was amazing! He picked up one of his small harmonicas several times shortly before he passed and played “Red River Valley,” with one of his daughters singing it with him. He never forgot how to play it. A sweet memory.

He was known to be an excellent dancer and he and Mom loved to go out and dance whenever they could when they still had the moves!  Even in his last months, he enjoyed reliving his happiest moments, raving about what a beautiful dancer mom was.

Although he was gone a great deal while we, his daughters, were growing up, he managed to teach us the basics of how to swim, to ride a bike, to throw, catch, and hit a ball, to row a boat, shoot a BB gun, ride a little motorcycle, and other childhood pursuits. More than that, though, he taught us to be able to find fun in unexpected ways and places, to observe the world with wonder, to laugh at ourselves, to reach deep inside when we were scared and pull up a fistful of courage, and determination, to work hard, give an honest day’s work, to always look for what you can learn from an experience or situation, to be kind but to stand up for ourselves, to take care of those smaller than you or those in trouble. Some of it he passed on by way of his stories. Some of it he passed on by example. All of it he passed on to us with love.

When we think of our father, we see an honest, humble, kind and hardworking family man,  generous to a fault, and quick to laugh, joke, encourage, and of course, give advice! Toward the end, he was always saying, “I’ve had a good life. I had a wonderful wife and two wonderful daughters. I saw a lot of things and had a lot of adventures, and lived much longer than I ever thought I would. But now I am ready to go.” Dad was looking forward to joining all of his friends and loved ones who went before him and maybe to see Willow Grove how it used to be one more time.

Dad passed away quietly in his sleep with family members close by. We will miss him terribly, but in the words of his beloved life long best friend and cousin, Jack See, “Not goodbye, but so long.” It has been an immense honor to have you for our father, Dad.

NO FLOWERS, PLEASE.  In lieu of flowers, memorial donations may be made to the Veterans of Foreign Wars or another Veterans' charity.

To send flowers to the family or plant a tree in memory of Elmer Gentry, please visit Tribute Store

Share Your Memory of
Elmer
Upload Your Memory View All Memories
Be the first to upload a memory!
Share A Memory
Send Flowers