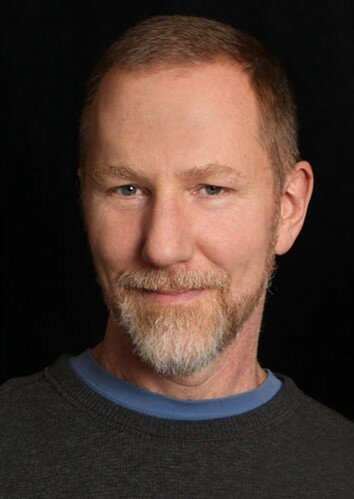 David Anton Hlavsa, age 60, died from a pulmonary embolism to both lungs on January 28, 2022, in Olympia, Washington.

For over 30 years, from 1989 to 2020, David was a Professor and the Director of the St Martin's Theater Arts Department. Besides theater and film, he taught courses in literature, religious studies, education, business leadership, women's and gender studies, economics, and sociology. In 2005-2006, David received the Monks of Saint Martin's Outstanding Teaching Award.

As a professor, he deeply touched the lives of hundreds of students. From the many postings on Facebook, here is just one:

“Till this day, I still hear him saying to me, ‘…that’s a choice’ whenever I make a decision that’s rash in the moment, but could still become a good idea later with some extra care. This one really hurts, I’m not okay, and I know my SMU extended theater family is hurting today. To my SMU dad, director, mentor, and friend: David Hlavsa we love you, and you will be missed by so many.”

Directing over 40 plays, he documented his teaching methods in the book, An Actor Rehearses: What to Do When and Why, about which Simon and Schuster said, "because author David Hlavsa's emphasis is on relating acting to life, performers learn to make a remarkable connection between becoming a better actor and becoming a better person: more compassionate, more vital, more alive."

One of David's favorite productions was Everyman, a 15th century morality play. When Death comes calling, the play asks, how will you measure your time on Earth? Will Everyman have affected his communities and loved ones in positive ways?

At times, David's selection of plays and his advocacy for academic freedom and better staff wages would push St. Martin’s comfort zone. Yet, as his fellow faculty member, Dr. David Price, wrote, “His colleagues and the campus community were made richer by having encountered him and his works.” He was elected President of the Faculty Senate twice, in 1998-1999 and again in 2006-2007.

Forthright, David’s essay “My First Son, A Pure Memory,” inspired by the loss of his son, James, who died in the womb, was featured in “Modern Love,” a column of The New York Times. This was expanded in his acclaimed memoir, Walking Distance: Pilgrimage, Parenthood, Grief, and Home Repairs, chronicling the journey with his wife, Lisa Holtby, along the Camino de Santiago, through infertility and the loss of James until, in 2002, the arrival of their second son, Benjamin.

David was also among the founders of a Seattle men's group, meeting early Friday mornings year-round for many years. He played a leadership role, holding each accountable to the highest level of openness possible in the face of our shortcomings and of society's toxic masculinity. So it was appropriate that, at the time of his death, David was pursuing a Master of Arts degree in Counseling.

He was a good husband to Lisa and a devoted father to Benjamin, taking immense joy in Ben's intelligence, his argumentative skills, and their shared interest in cooking. Throughout his life, David was also a good friend to his mom, ViVi Hlavsa. For years, he emailed her a favorite song each day across the three thousand miles of their geographic separation.

At the end of Everyman, as he is taken by Death, Everyman is abandoned by all of his friends - Strength, Beauty, Knowledge, his Five Wits, Discretion; he is left with only his Good Deeds. "Methinketh, alas! that I must be gone to make my reckoning, and my debts pay; For I see my time is nigh spent away," he says, speaking to all of us left behind. "Take example, all ye that this do hear or see, How they that I loved best now forsake me; Except my Good Deeds, that bideth truly."

David is survived by his mother, ViVi Hlavsa; his wife, Lisa Holtby; their son, Benjamin Holtby Hlavsa; his friends, his students, and his many, many Good Deeds.

To send flowers to the family or plant a tree in memory of David Hlavsa, please visit Tribute Store