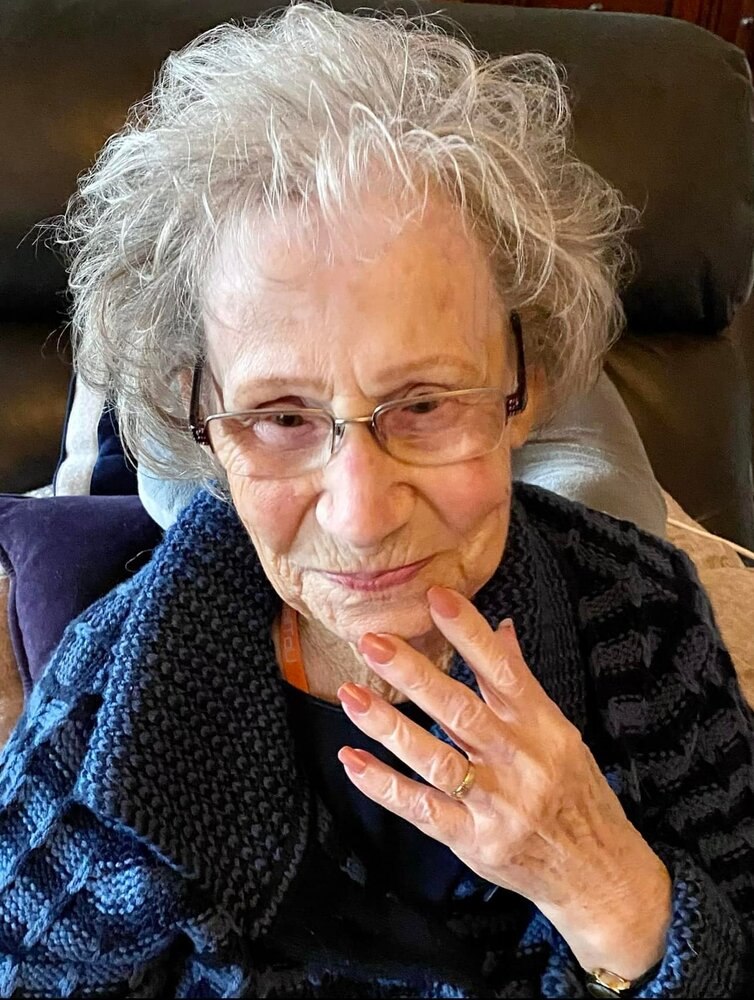 Juanita “Nita” Gibson peacefully joined Jesus with family by her side on Tuesday, January 25, 2022, at the age of 94. Nita was born December 14, 1927, in Dover, Arkansas, to James and Sara (Blackston) Trimble. She was the ninth of ten children in the Trimble family and was born premature, weighing just three pounds. That was the beginning of her spirit of tenacity that would last her entire life.

Her young life was full of hardship and struggle during the Great Depression. Her family lived and worked on their farm until her father’s death, when she was just 12. Shortly after, the family relocated to Yakima, where they found work in the orchards. They eventually settled in Grays Harbor County, where she would plant the seeds of what would become a life full of family, friendship, fellowship, and love.

Nita met Harold Gibson when she was 13, and fell in love. He later enlisted in the Army and served overseas for three years during WWII. She waited faithfully for his return and, on March 14, 1947, they were married in Montesano, Washington. They settled in McCleary, where they resided for their 47 years of marriage and where she stayed until 2020. Heartache hit in 1949 and again in 1950 when they lost two newborn infants, one daughter, and one son. In 1952, they welcomed their daughter, Rhonda (Osgood), and in 1955 another daughter, Janet (Richards).

Once Nita became a grandmother, she became lovingly referred to as “Mom Nita” by all of her grandchildren, great-grandchildren, and great-great-grandchild. She was an extremely proud mother and grandmother, and loved to tell stories about her family to anyone who would listen. No matter how big the family grew, she never forgot a birthday or anniversary. She loved holidays and any excuse for the family to gather and share a meal.

Nita was deeply faithful and was an active member of the McCleary Assembly of God church for nearly 70 years. She was a spiritual leader and prayer warrior for not only her family, but also a powerful link in a prayer chain for anyone in need. She was a pillar in the church; her acts of service included decorating the sanctuary, providing music and song worship, hosting Bible studies, teaching Sunday School, orchestrating women’s groups, and cooking and baking for fellowship gatherings. She was especially famous for her pie-making.

Nita loved flowers. She was trained as a professional florist and custom cake decorator and, in the 1980s, she owned and operated the “Flower Basket” flower shop in McCleary.

Nita was small but mighty, fiercely independent and perseverant. She loved to travel and made several cross-country road trips and flights to visit family. She was part of a close-knit group of friends who prayed together, walked together daily for several years, lunched together weekly, and shared all of life’s joys and sorrows in 70 years of friendship. She was known for her style and grace, always looking beautiful with perfectly coordinated outfits, jewelry, hair, and makeup.

Nita’s was a life well-lived. She gave and received much love and will be deeply missed.

"And let us not grow weary of doing good, for in due season we will reap, if we do not give up." -Galatians 6:9

To send flowers to the family or plant a tree in memory of Juanita Gibson, please visit Tribute Store

Share Your Memory of
Juanita
Upload Your Memory View All Memories
Be the first to upload a memory!
Share A Memory
Send Flowers