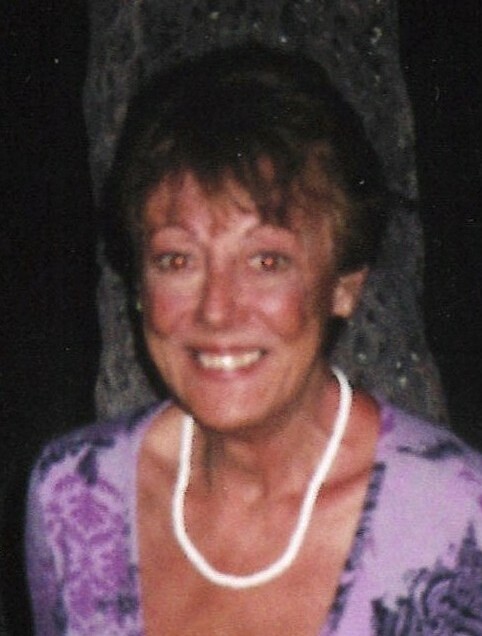 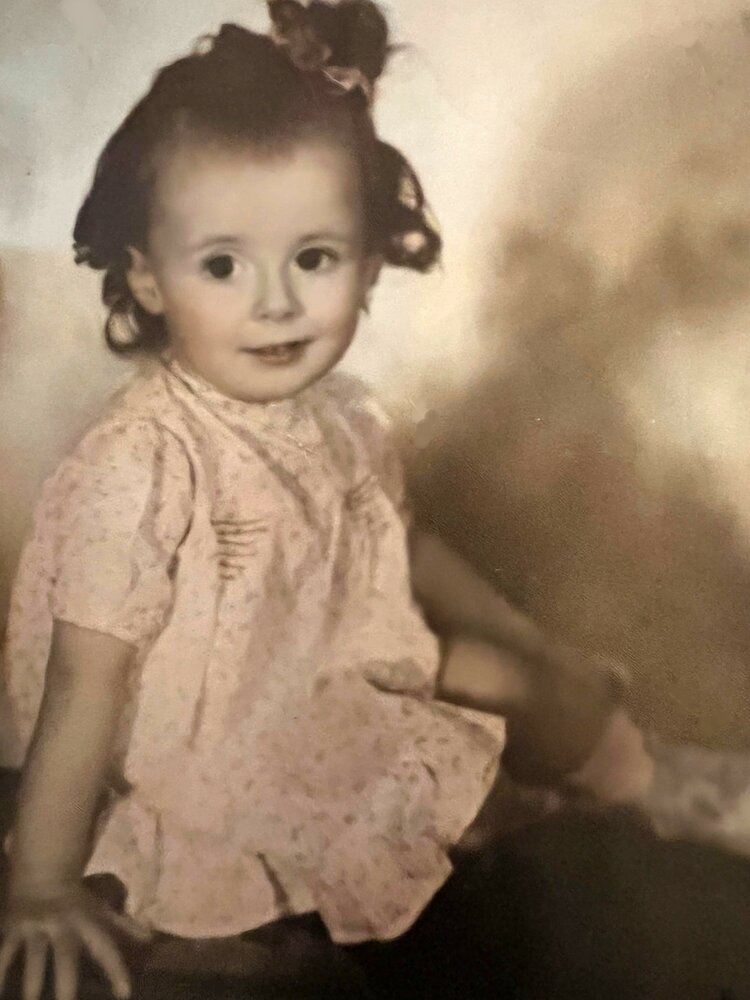 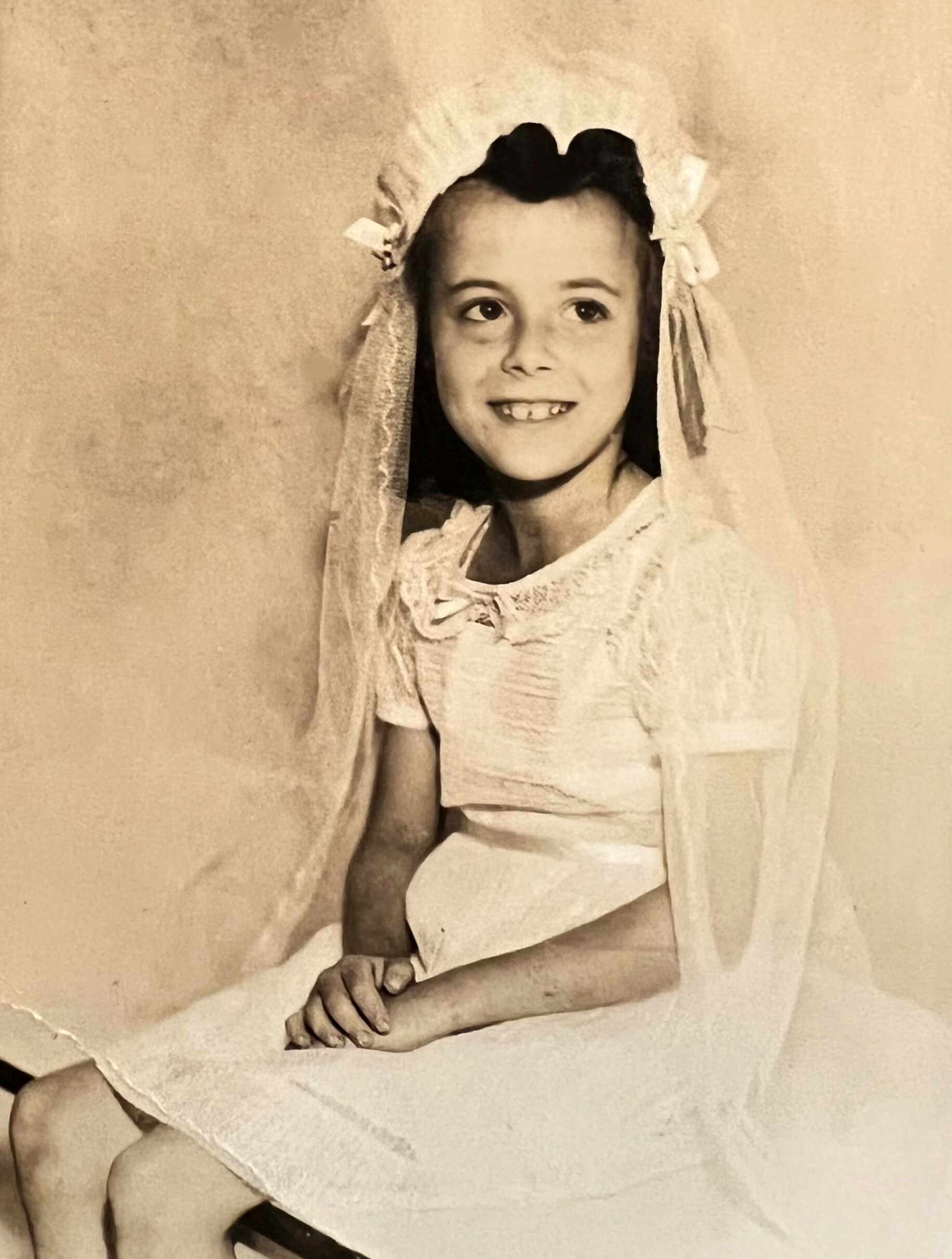 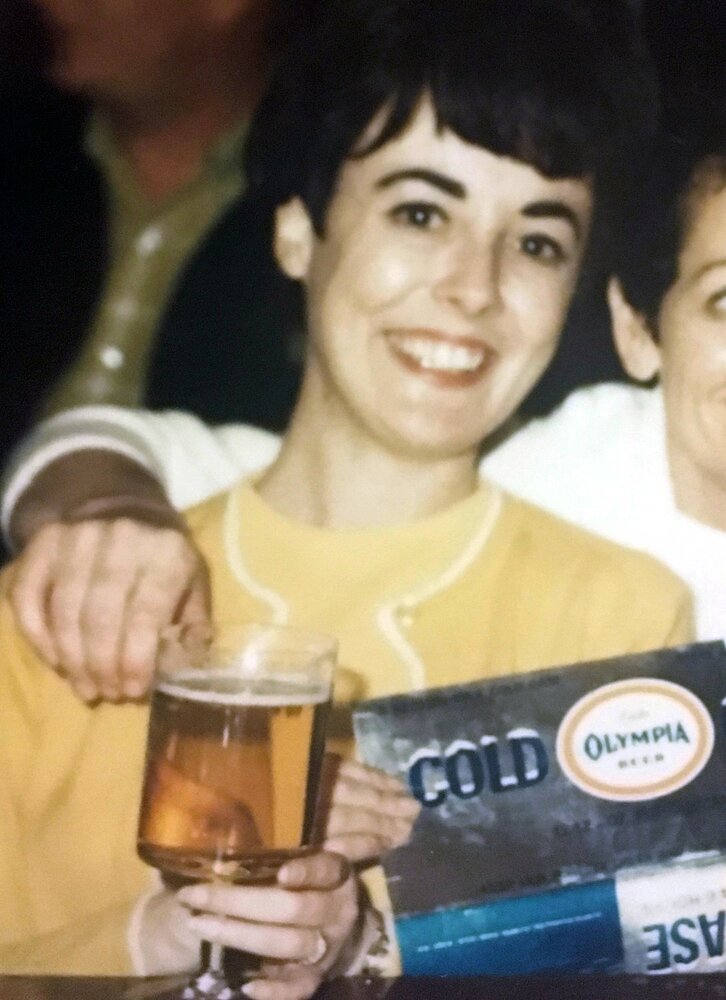 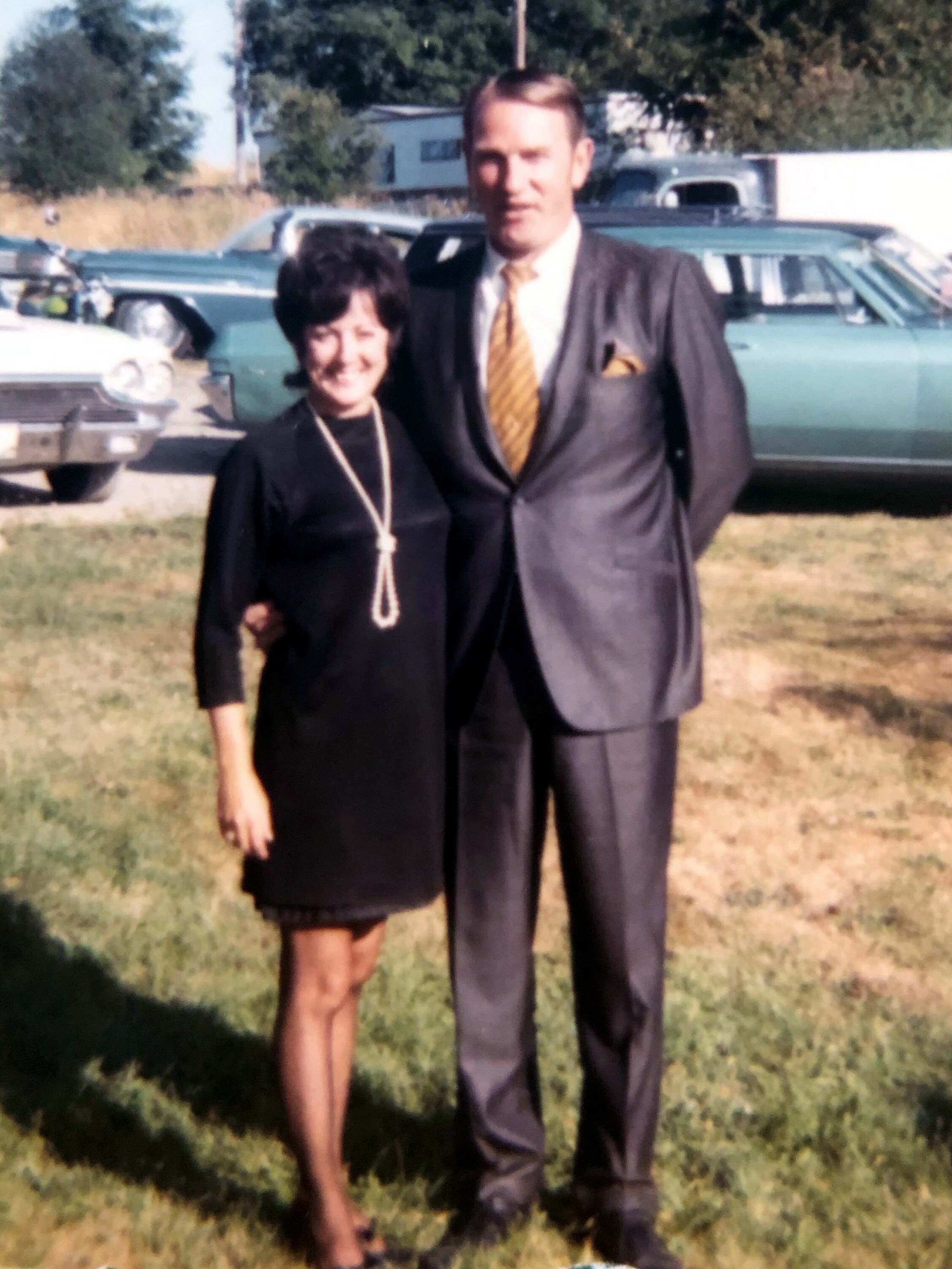 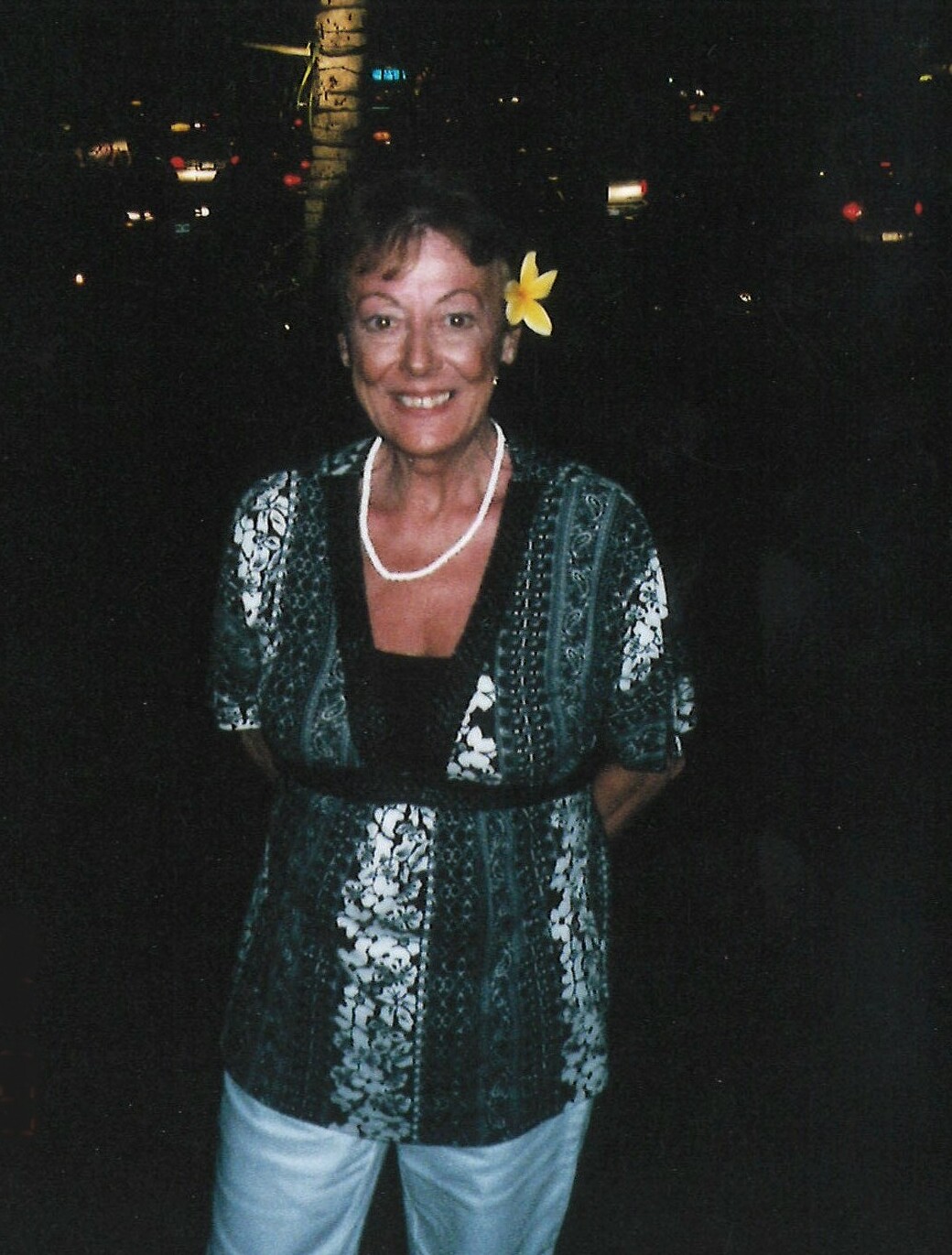 Joyce Ann (Egan) Brand-Welker was born to George and Evelyn Egan on March 13, 1938, in New Hampton, Iowa. The second of six children, little Joyce was the only girl. In 1944, the Egans moved to Bremerton, Washington, where Joyce attended Our Lady Star of the Sea Catholic School for girls… oh the many entertaining stories she told of those years. At just under five feet tall, she was a little spitfire and being the only girl with five brothers, she needed to be! She was known for her fun sense of humor, quick wit and cheery disposition, and was voted “Best Sense of Humor” by her classmates. Very active with school and always on the move, she was a member of the dance team and, in 1955, she was crowned queen of the Catholic Youth Organization, representing all of Washington. Joyce graduated from Bremerton High School in 1956 and after a short stint in Dallas, Texas, she moved to Lacey, Washington in 1958 and began working for the State Department of Natural Resources. She would later spend several years in banking, and then end her out-of-the-home working career with the Thurston County Treasurer’s Office.

On July 15, 1962, shortly after midnight, she married Don Brand. They joked about how they whimsically decided to get married one night while out with friends and two of Don’s brothers. With big Don’s large stature at 6’2”, and her still just under five feet tall, they were a memorable couple. Twelve years later, they ecstatically welcomed their son, Jody Ray, and just about 18 months after that, along came their daughter, Kayci Donne. In 1980, their daughter, Chelsea Ann was born; sadly, they lost her to SIDS just a couple of weeks shy of her first birthday. Joyce’s kids were the greatest joy of her life, and there was nothing she wouldn’t do for them.

Joyce “Mama Girl” was a doting mom, attentive homemaker, talented seamstress, and an avid gardener, spending hours in the summers tending to her flowers and shrubs while cautiously eluding the deadly garter snake, her most feared nemesis. She was an animal lover (the furry ones), especially her kitties, who were inevitably found on her lap if she was sitting down. She loved music, and had an artistic flare and creative sense for home decor. She always seemed to have some sort of home improvement idea in the works; she sure kept Don busy with projects. She was an incredible cook, making the Brand home a popular hangout for all the kids. Her homemade refried bean burritos and tacos were a favorite and requested often. She always loved having a houseful of kids, despite her endless compulsion for wanting to keep a tidy house. These years were some of her happiest memories and she reminisced about them often.

Little Joyce was no stranger to a frosty glass of Oly Gold. Somehow, she made the cheap domestic light beer look like a glamorous beverage as she drank from her elegantly tapered glassware, held by a hand with beautifully manicured nails. To this day, she is still remembered and the honored subject of toasts made in those very same glasses. She was always stylishly put together, and was never to be seen outside the house without her hair and makeup perfectly intact. Her laugh…she had a laugh like no other and, if you were in the presence of one of her laughing fits, it was impossible not to join her in the hysteria. When she really got going, it was hard to tell if she was still laughing or needed to be resuscitated. It was the best.

In December 2005, we said goodbye to our beloved Papa Dad. Joyce would forever cherish their 43 years of memories and life together, and spoke of him often until her memory finally faded.

In 2007, still vibrant and spry at 69 years old, and with still so much life to live, she married her longtime friend, John Welker, in Las Vegas. The two traveled the world and had 10 fun adventurous years together before his passing.

Joyce spent her last six years at Brooks Blessings adult family home, where she dazzled her caregivers with her sweet, bright smile and infectious laughter. As she slipped away into the depths of dementia, there was still the occasional familiar glimpse of that same little funny spitfire with the often amazingly well-timed expletive or offhanded comment. Always good for a chuckle, Mom was still in there. Alzheimer’s devastatingly robbed her of her memory, ability to communicate and recognize her loved ones, but her sparkle and spirited personality never dimmed. She was still smiling, singing and laughing up until her last days.

On January 26, 2022, with Kayci by her side holding her tiny little hand, she spent the evening being serenaded by some of her favorite musicians, and in the early morning of January 27, she succumbed to this cruel disease.

Our funny little mama girl was truly one of a kind and is missed beyond measure.

A private gathering will be held at a later date to commemorate the life of this most treasured little lady and unforgettable soul.

To send flowers to the family or plant a tree in memory of Joyce Brand-Welker, please visit Tribute Store

Share Your Memory of
Joyce
Upload Your Memory View All Memories
Be the first to upload a memory!
Share A Memory
Send Flowers