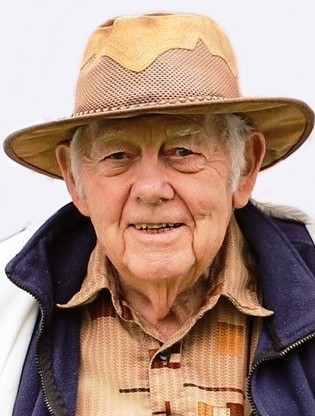 In February 1942, Bernie enlisted in the U.S. Marines and was stationed with the 1st Marine Division in the Pacific. He was awarded the WWII Victory Medal, Honorable Service Lapel Pin, and Asiatic Pacific Campaign Medal with one clasp and Combat Action Ribbon. Corporal Nolan was honorably discharged in May 1946. His military legacy was reflected in his son Jeff’s eight years in the U.S. Navy and granddaughter Lydia’s five and one-half years in the U.S. Army.

In 1949, Bernie went to work for the Boeing Company, where he worked for 39 years. He was in the Boeing Electronic and Aerospace Divisions as an electrical technician, supervisor, and engineering support analyst. He worked primarily on Defense products, including missiles such as the Bomarc and Minuteman, along with aerospace products such as the Lunar Orbiter and Lunar Rover. He used to brag that his fingerprints were on the moon.

In May 1948, Bernie married his life-long love, Marian. After he retired in 1988, they became snowbirds. They traveled back and forth between their homes at Lake Limerick and later Lacey, Washington, and Surprise, Arizona, via Tehachapi, California. They enjoyed traveling, golfing, playing pickle ball, and socializing with a wide circle of friends.

Since Marian passed away, Bernie loved spending time with his large family and was a regular volunteer at St. Vincent de Paul in Olympia. He was comforted in his final days by the presence of family members.

To send flowers to the family or plant a tree in memory of Bernard Nolan, please visit Tribute Store