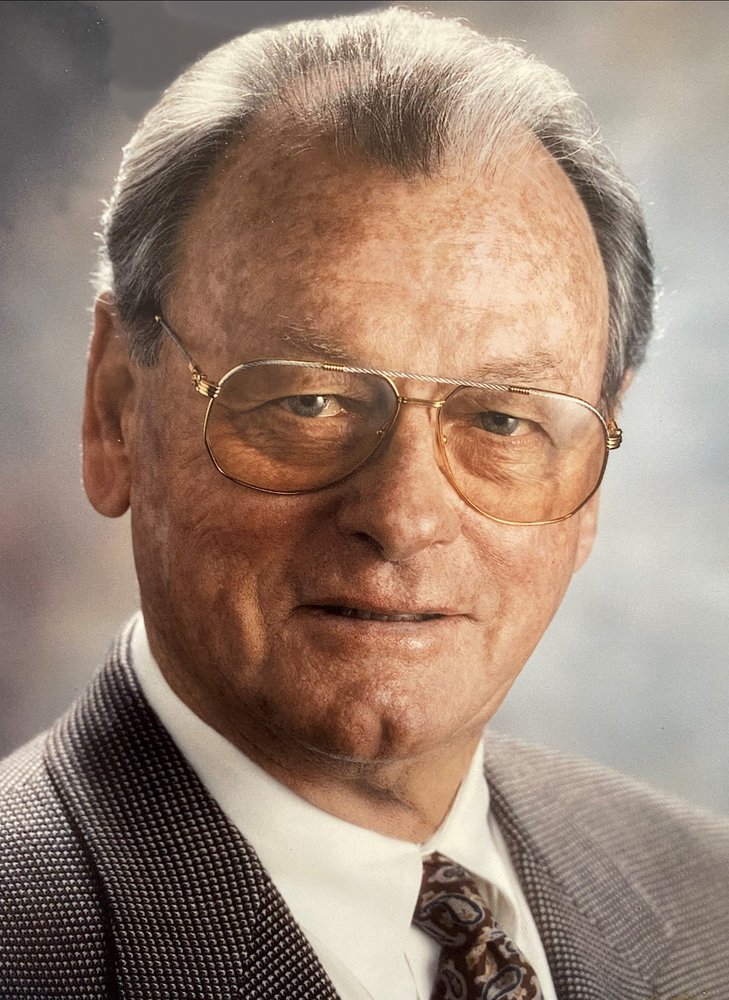 Edwin Jeremiah McCarroll, beloved husband, father, and Papa, died peacefully at home in Olympia, Washington, on June 16, 2020, at the age of 94.

Ed was born in 1926 in Taber, Alberta. His life story is one of hard work, perseverance, and the American dream. He was born to humble beginnings in Canada and was instilled with hard working family values from an early age. At the young age of 17, he was called by patriotism to join the Royal Canadian Navy during World War II. After returning from the war in 1945, Ed and his parents moved to the United States.

His first job was as a lot attendant at a Spokane car dealership. The family soon moved to warmer weather, settling in Riverside, California. There, Ed moved up the ranks at a local Chevrolet dealership and achieved his goal of becoming a U.S. citizen in 1953. He became a partner in several California dealerships before returning to his Northwest roots in 1965. Settling in Olympia, he purchased his first dealership, Capitol Chevrolet. Ed had a passion for motorcycles and was impressed with the Honda brand that was now entering the automotive field. “If their cars are as good as their motorcycles,” he said, “we will both be successful.” Ed was right, and in 1971, he opened Capitol City Honda and became one of the first Honda dealers in the Northwest. Ed went on to purchase and sell over seven other franchise car dealerships and was one of the founding members of the Olympia Automall.

It is no wonder he was a success, sticking true to his motto: “If there is one thing you want to do in life, pick that one thing. Be absolutely the best at it, and the rest will take care of itself.’” In 2011, Ed received the 40-year recognition award from American Honda. In 2013, Ed received the Dealer of the Year Award from WSADA. Ed’s daughter Kelly Levesque took over ownership of Capitol City Honda in 2017. He maintained his office and board position for the remainder of his life. He held a fierce passion for the business and the people who worked for him. Even in his last days, he would ask what had happened at the dealership that day.

Ed was a quiet supporter of the community and felt strongly about contributing to various charitable causes. He enjoyed a long marriage of 48 years with wife Patricia McCarroll. They enjoyed many activities together, including downhill skiing, travelling, and boating through the San Juan and Canadian islands every summer. He was a lifetime member of the Olympia Yacht Club. He lived a healthy life, walking three to five miles every day well into his 90s.

In lieu of flowers, the family suggests that memorial gifts may be made to The Navy-Marine Corps Relief Society.

To send flowers to the family or plant a tree in memory of Edwin McCarroll, please visit Tribute Store

Share Your Memory of
Edwin
Upload Your Memory View All Memories
Be the first to upload a memory!
Share A Memory
Send Flowers