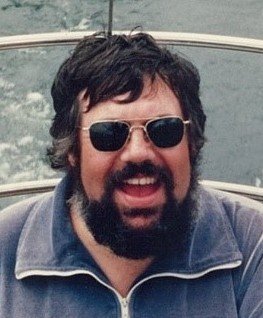 Tom passed away at Good Sam Hospital in Puyallup, Washington, on January 24, 2020 from cardiac arrest and kidney failure.  He is survived by his wife of 40 years, Virginia; sons, Andrew and Nicholas; grandson, Timothy; daughter in-law, Kelli; sister, Sally; and his ever-faithful K-9 friend, Auggie, and bird, Piper.

Thomas D. Kinsman was born on September 25, 1948, to Thomas A. and Bettie Jean Kinsman.  He grew up in Seattle, along with his older sister Sally, and by all accounts had a great childhood and many “adventures” that surely kept his parents on their toes.  Tom’s propensity for stepping out and kicking up his heels in his younger days took Tom on a number of youthful journeys that likely would have gotten him in a tight spot had he been caught, but made for great laughs and excitement for Tom and his friends.  Because Tom’s willingness to be a bit “wild and crazy” now and then carried over throughout his life, he lead a full and rich life.  Tom truly was a spellbinding storyteller.  If you knew Tom and he shared his stories with you about some of these experiences, he would have you shaking your head and often laughing to the point of tears.

If you had the privilege of knowing Tom, you would agree that Tom’s family was first and foremost in his life.  They clearly were the wind beneath his wings in all he did.  Tom passing leaves a hole that will never be filled in his absence, but the many cherished memories that the family made together and one-on-one with Tom will help carry them through the sorrow of this moment.  Recently, Tom became a grandparent.  Grandpa Tiki (TK) was elated at the birth of his grandson, Timothy Thomas, who quickly became buddies with Tom.

If you knew Tom, you would describe him as being someone who was always kind and compassionate.   It would be very uncharacteristic to ever hear Tom engage in bad mouthing or running someone down.   Tom looked for the good in people and met them on their own terms.  If Tom was your friend, you could count on him to be there when you needed him.  Tom was not shy about talking to strangers and made friends wherever he went.  He had a smile that radiated warmth and put others at ease.  He would ask you questions in your conversations and actively listen to what you had to say and was not judgmental; accepting others for who they were.  It also was fun to engage Tom in good natured verbal jousting – he was very capable of holding his own and quick-witted.

If you knew Tom, you appreciated his easy-going nature and sense of humor.  He was never one to engage in drama and always was steady and solid when challenges came his way.  Even when facing declining health after retirement, Tom maintained his positive spirit and never complained or felt sorry for himself.  Instead, he strived to lift others up.

Tom had an interesting career as an Air Traffic Controller and rightfully was proud of his years of service.  While he no doubt brought levity and his uplifting personal dynamics to the workplace, there is no question that he would strive to be on top of things while on the job and would be a calming presence on the air for pilots in high stress situations.  Tom was a rock in times of crisis both on and off the job.

Outside of his family, Tom had several distinct passions.  He was passionate about watching sports and probably one of ESPN’s best customers.  Tom loved sports cars and reminisced about a 240Z he had in his early adulthood – the top end of the car was explored numerous times.  While Tom deeply regretted selling the Z car, he found a suitable replacement in his Porsche 911 Carrera convertible in which he and Virginia took many memorable road trips.  The rumor is that the top end on the Porsche can blow the doors off that 240Z.  Aside from the joy of belting his way through the gears, Tom knew he looked good behind the wheel of that Porsche.  Tom also had a lifelong love of trains and the railroad.  He knew more about locomotives and railroad history than anyone.  If one stumbled upon an old steam engine or interesting historic railroad paraphernalia, Tom could tell you the specific details about it, right off the top of his head.  His knowledge about trains was astonishing and augmented by his interest in scanning the radio railroad frequencies while on extended road trips.  By the way, in Tom’s travels, he identified the best restaurants for fellow foodies to visit were they to follow in his footsteps.  It did not seem to matter where you went, Tom knew the best places to get a great meal.

Finally, if you knew Tom, you knew he was a not only passionate about sailing, he was an extraordinary sailor.  Tom and Virginia maintained a classic 30-foot sailboat for 40 years and he sailed it regularly right up until his death.   Tom was an expert at navigation and knew the waters of Puget Sound like the back of his hand.  When Tom was at the helm, he was totally in his happy place and truly one with the boat.  A look of peace and joy radiated in his face when he sailed this vessel and the memories that the entire family generated while sailing together are valued more than words can express.  Tom and Virginia’s love for the sea clearly was passed along to their sons.

If you knew Tom, you clearly knew a very good man who truly made a difference during his time with us and will be forever missed.  If you did not know Tom, you truly missed out …

An announcement will be forthcoming with the date, time and location for Tom’s “Celebration of Life.”

To send flowers to the family of Thomas Kinsman, please visit Tribute Store