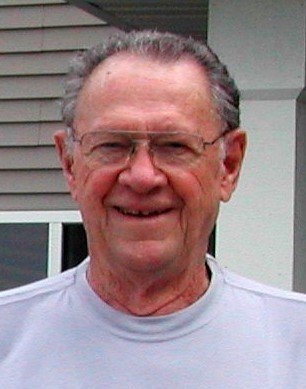 Merle F. Wells, 93, passed away at home on October 28, 2019 in Olympia, Washington. He was born March 25, 1926 to Arthur E. and Myrtle Smith Wells, in Sanborn, Iowa, where he lived for 18 years.  A resident of Olympia, Washington for the past 21 years, he also lived in Mitchell, South Dakota for several months, Minneapolis, Minnesota for five years, and Houston, Texas for approximately 47 years.

Merle joined the U.S. Army Air Corps in 1944 at age 17, serving until December 1945, working as an airplane engine mechanic.  He became a member of the Caterpillar Club as a result of jumping from a burning airplane.  Upon discharge from the service, he continued to serve in the Army Air Corps Reserves / U.S. Air Force Reserves from 1945 until 1952.

After discharge from the service, Merle relocated to Mitchell, South Dakota to complete high school, graduating in 1946.  He met his future wife, Carolyn, there and they married on August 17, 1947 in Mitchell.

Merle moved to Minneapolis in 1946.  He found work at McGarvey Coffee Company and worked there five years before moving to Pasadena, Texas.  He became a welder at Sinclair/ARCO refinery, where he was active in the local labor union.   He left Arco in 1977 to build homes for Lee Reeder Homes, Inc.   Within a few years, he established his own company and became a homebuilder in the Houston area for 10 years before retiring.

Merle loved to create and work with his hands.  He always had projects going in his garage, full of tools (always with the safeties removed), making custom furniture (built solid to last forever), remodeling houses for both his daughters, fixing just about anything, or creating works of art.  He never needed to read instructions, as he had an innate sense of how things fit together.  He also used his building skills to work with Habitat for Humanity in Egypt and Peru, two of the many places he enjoyed traveling to around the globe.  In Houston, where he loved the hot weather, he erected a large greenhouse where he raised more than 500 beautiful orchids over several years.   He really missed that heat when he moved to Olympia to be near his daughters and grandchildren.

Merle played bridge for more than 60 years, continuing to do so until the last weeks of his life.  Late in life, he took some cooking classes, providing his family with tasty treats, and he could always be counted on for a batch of biscotti or chocolate chip cookies.

Merle enjoyed being with friends and family.  He was always ready with a quick smile and a generous heart, offering to help people in need when he could.  He will be deeply missed by his family and many friends.

To send flowers to the family or plant a tree in memory of Merle Wells, please visit Tribute Store
Friday
6
December

Share Your Memory of
Merle
Upload Your Memory View All Memories
Be the first to upload a memory!
Share A Memory
Send Flowers