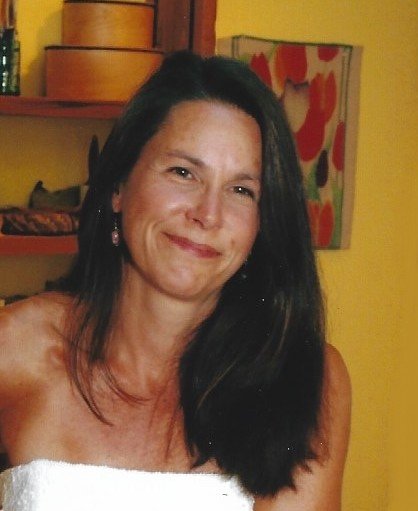 Laura Kaye Wiggans was born October 29, 1961 and passed from this world on January 24, 2019 due to complications from and treatment for brain cancer after a 12-year struggle.  She accepted her diagnosis and limitations with quiet grace and courage that earned her the admiration of all who encountered her.

Laura grew up in eastern Kansas, first attending the University of Kansas and later moving to Washington state to attend The Evergreen State College.  She met Michael at this time at a shared house on Puget Sound, later moving off to their five acres where they would carve out a home site, build gardens and raise their son, Keenan.  Laura went back to school years later to earn a degree in Nutritional Therapy as a means to experiment on friends and family with homemade tinctures, supplements and flower essence potions.

She had a particular appreciation for good books, an evening cocktail or two, a well-prepared meal and flowers of all kinds.  Her gardens were memorable to those who saw the summer palette painted across the hillside in the hand-built rock terraces.  She had a crafty streak too, sewing, tile mosaics, paper and cards, metal work to name a few.

We are so much more than what we tally up at the end of our lives.  Or the books we have read or places we have travelled or jobs we have held.  Most of us are regular people not particularly well-known or known well by many, living out our peaceful lives.  It was such with Laura.  She enjoyed the simple rituals of life: coffee in the morning while watering plants, a late breakfast, and a good read in the afternoon while everyone was away.  She did not share herself widely with the world but, for those of us who did know her, she will be dearly missed.

Laura is survived by her life partner, Michael H. Moore of Olympia, Washington; son, Keenan Wiggans-Moore of Seattle, Washington; her father, William H. Wiggans (Roanne) of Wichita, Kansas; and her brother, Jeff Wiggans (Sheyne) of Parker, Colorado.  She was predeceased by her mother, Carol Wiggans (2013).

A private gathering will be held at a future date.  Any memorial donations may be made to Garden Raised Urban Bounty (GRuB) or a library or animal shelter of your choosing.

To send flowers to the family or plant a tree in memory of Laura Wiggans, please visit Tribute Store