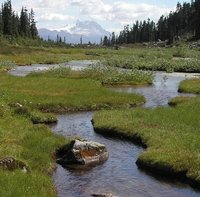 A loving mother, sister and friend to many, Lorraine was born June 22, 1930 to Bernice Wilmott (Murray) Smith and Spencer Smith of Seattle, Washington. She was a tiny woman, reaching 4’9”. However, she raised five children by waiting tables at the Olympic Hotel in Seattle for many years. She later also became a dental assistant for Dr. Neil Smith of Vashon Island, working for him approximately 30 years until he closed his practice. Lorraine was fun and funny. She always spoke highly of everyone she met, and loved her associations and the people she served in the dentist office. She enjoyed her children, mothering them and any other children they brought home to meet her. She lived on the water on Burton Peninsula, wanting her children to have a beach to grow up on. Later, she sold her property there and moved to Vashon Highway SW. She brought all her children together to help refurbish the log cabin where they all enjoyed her company and summers in the sunshine on the water. Lorraine passed way August 16, 2013 at 12:50 p.m., attended by her two daughters. She will be greatly missed. Please leave memories of Lorraine or condolences for her family in the Guestbook below.