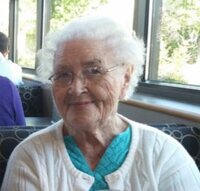 Bonnie Elyn Shedd, 92, passed away peacefully at home on June 10, 2022, with her daughters by her side. Bonnie was born to Anton and Ellen Stomsvik on November 16, 1929, in Williams, Montana, the last of seven children.

In 1944, the family moved to Port Orchard, Washington, where her father Anton found work in the Bremerton Naval shipyard building ships for the war effort. Later the family moved to Olympia, where Bonnie graduated from Olympia High School in 1949. In 1950, she married Al Fritsch. The couple welcomed their daughter Debbie the following year. In 1955, their son Johnny was born. In 1964, son Jamie was born but sadly Jamie passed away shortly after birth.

When Debbie and Johnny were grown, Bonnie and Al's marriage unfortunately ended.

In 1978, she married Ken Shedd and inherited four step-kids. Though many of her friends and family members thought she was outside her rational mind when she took on all those step-children, Bonnie, Ken, and the four kids made it work.

Bonnie and Ken built a wonderful life together. Bonnie retired from a long career with the Washington State Department of Transportation in the early 1980s and Ken retired a couple years later.

Bonnie and Ken made the most of their retirement. Almost immediately, they started welcoming grandchildren. Birthday and holiday celebrations were a regular and often loud occurrence at their home.

They loved to travel, acquiring a fifth-wheel trailer and later a motorhome.  They traveled extensively across the country, spending several winters in Arizona. They enjoyed cruises to Mexico, Alaska, and other destinations. They later joined a travel club and made many friends from all over the country.

Bonnie loved her family and took great interest in the lives of her grandchildren and loved them all unconditionally. She and Ken attended as many of their grandchildren's games, sporting, and life events as they could. In addition to her 13 grandchildren, she also was blessed with three great-grandchildren.

Ken and Bonnie remained active in their later retirement years from their home in Lacey. They entertained friends and continued to host birthdays, Christmas, and other gatherings through the years.

If you knew Bonnie, you couldn't help but love her. She had an infectious laugh, a great sense of humor, and she truly cared about and loved everyone in her life. If you visited Ken and Bonnie at their home, you had better come with an appetite because she was going to insist you eat something.

Bonnie was a master designer of quilts. She made numerous quilts for friends and family. If you received a quilt from Bonnie, you knew it was her greatest gesture of love. The love and joy she put into making quilts was inspiring.

Sadly, Bonnie lost Ken this past January. Although Bonnie's family misses her and Ken tremendously, they take great solace in knowing they are together once again.