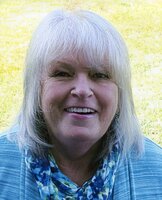 Minnie A. Howerton passed away February 15, 2022, in Olympia, Washington.  She was born July 14, 1954, to Henry and Inez McKinley in Morton, Washington. She also lived in Ilwaco, Washington, until relocating to Tenino in April 2016.

Minnie earned an Associate’s Degree in medical billing at Grays Harbor Community College.  She married Steven Wirkkala and they had three children.  Although they later divorced, they stayed great friends.  She remarried James Howerton.

Minnie was selfless, kind and loving.  She enjoyed scrapbooking, sewing, knitting, crafting, cooking, baking, going to garage sales, and spending time with friends and family. She also loved her grand-dogs.

In lieu of flowers, please make a donation in Minnie’s honor to a charity of your choice.