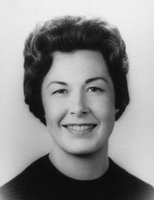 Judith “Judy” Ivanovich was born in Shelton, Washington, on December 27, 1932, and passed away peacefully in Olympia, Washington, on October 24, 2020 after a four-year bout with Alzheimer’s and a two-week bout of COVID -19. She was 87 years old.

Judy graduated Shelton High School at the age of 17, and a week later moved to Capital Hill in Seattle. She put herself through the University of Washington and got her Master’s in Nursing. She worked at Harborview and Group Health. She spent a few years as a flight attendant with Pan-Am on transatlantic flights; back then they needed to have a nurse /flight attendant on flights that went that far. She also volunteered for more than ten years with the antidefamation league. She was a beautiful, humble, and very strong woman.

She married Frank Ivanovich in 1966 in King County. Their son, Chris, was born in 1968 and they made their home in Burien, Washington, and later in life on Treasure Island in Grapeview, Washington.

Judy is survived by her husband of more than 50 years, Frank; her son, Chris; daughter-in-law, Molly; and her very much loved grandchildren, Mia and Mikhail. She will forever hold a very special place in our hearts and we will cherish all our memories with her dearly. Cheers to you Judy.