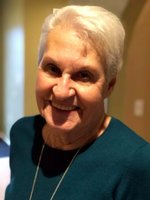 Beth Putnam Cazel was born November 22, 1963 in Anacortes, Washington, the first-born child of Ed and Elsie Putnam. She grew up in Yakima, Washington, graduating from Yakima High School in 1953. A whiz at typing and shorthand, she decided not to accept an offer of employment from Hanford, Washington, and attended Central Washington University. Her much loved son, Steven, was born on March 19, 1954. She struggled as a single mother with no support, but remained strong.  In 1961, she married the love of her life, Bob Cazel, a career Master Sergeant in the Air Force. She was lovingly welcomed into the Cazel family by Bob’s mother, Dorothy, and his sisters. Beth and Bob had three more children together, Sylvia Cazel, Robert Cazel and Christine Cazel King.

When Bob passed away in 2002, Beth moved to Bend, Oregon to be near her daughters. Shortly after, she met George Leebolt, who adored her. Not wanting to lose her military benefits, they didn’t marry but remained devoted to each other until George’s untimely death in 2013, at which time she moved to Lacey, Washington, to be near her son, Steven. Beth, who loved to cook, decided the way to meet people was to invite them over for dinner. It worked. The residents of Laurel Oaks in Lacey had a new favorite resident and it was Beth.

Beth is survived by three children, Steven, Sylvia and her companion Cliff Cannon, and Christine. Her grandchildren are Jennifer Cazel, Megan and Jordan Eisenlord and Darrol Larsen. She also leaves behind her sister, brothers, and brother-in-law, who will miss her every day. Preceding her in death are her husband, Bob Cazel; son, Robert Cazel;and devoted friend, George Leebolt.