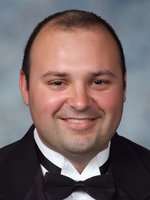 Robert graduated high school from Temple Baptist Academy in 2004, before attending Pensacola Christian College in Pensacola, Florida in the fall of 2005. He graduated with an Associate of Science in Criminal Justice. While attending college, Robert worked as a security officer until being hired on in the Abeka Print Shop as a logistics operator in 2014. Robert had a strong work ethic, a willingness to stay extra hours, and was recently promoted to night shift supervisor; he also drove the shuttle bus on weekends for college students. He was known for his crazy sense of humor, his silliness, and never knowing a stranger. Robert attended the Campus Church at Pensacola Christian College, and when home for visits, he attended Temple Baptist Church in Lacey, Washington.

Robert passed away on April 30, 2019, in Pensacola, Florida. He was so loved by his family, friends, and coworkers, and will be greatly missed!

Robert is survived by his parents, John and Lyn Strand of Olympia; his sister, Amanda (Damien) Jordan of Lacey; his nephew, Lachlan; and a niece due in July.

As a child, Robert accepted Jesus Christ as his personal Savior and only hope for heaven; now we rejoice that he is in the presence of God, and that we will see him again in glory.