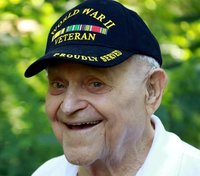 Dan graduated from Richmond Hill High School, Richmond Hill, New York (1942), and earned a BS in Social Sciences from American University in Washington, D.C. (1954).  He joined the U.S. Naval Reserve February 2, 1942, and served during World War II in the Pacific Theater aboard the aircraft carrier U.S.S. Cowpens as an Aviation Radioman/Gunner.  He was discharged December 17, 1945.  He rejoined the Reserve in 1947 but did not see active duty, and was discharged in 1951.

Dan enjoyed arts and crafts.  He also spent many, many hours volunteering at elementary schools, Thurston County Sheriff’s Office, Providence St. Peter Hospital, and Westwood Baptist Church, of which he was a member.  He also was a member of College Street Christian Church.