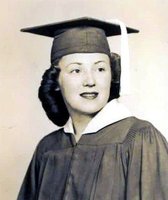 Audrey Lucille Villers was born to Bill and Neoma Villers on May 8, 1934 in Colville, Washington. She was the first of her three siblings, Letha, Karen and Kay. Bing Crosby and Katherine Hepburn were at the top of their careers. The family lived in Colville, working on the family farm until she was eight years old; then they moved to Centralia, Washington, where her dad took a job with Pacific Gravel.

Audrey graduated from Centralia High School in 1952. She briefly attended Centralia College but then took a job in Seattle with Pacific Bell as a telephone operator, where she met and lived with her best and lifelong friend, Pat Talmadge, and her soon to be sister-in-law, Lorna Mae Stedham. She spent a few years in Seattle, and eventually reconnected with Donald Ray Stedham after he returned from the Korean War.

Don and Audrey were married on February 14, 1959 and adopted their first child, Bradley Ray Stedham, in 1960. They proceeded to adopt four more children, Craig Merrill “Rusty,” Dawn Marie, “Dondi,” Wade Tyler, and Wendi Ann Stedham who was the last in 1971. In their early years, Audrey and Don owned and operated The El Rancho Bar & Grill, Trails End Western Store, and also raised and sold quarter horses on Trails End Ranch.  Don also began contract logging in the late 60s. They were busy people.

Eventually, Audrey had to become a fulltime stay-at-home mom because shuttling the children between all of their school functions became a full-time job and then some. Don and Audrey always pushed their children to play sports year-round, and encouraged them to be involved in anything they were interested in. Those were very good years. Tragically, on May 26, 1987, Don lost his battle with cancer at the age of 58.

A few years later, Audrey met and fell in love with Laurence Smith of Packwood, Washington. They were married in 1990, and Audrey moved to Packwood where Larry worked at the lumber mill. When the mill closed in 2000, they moved back and ran Grand Mound Driving Range as their retirement business. They had many good years together and enjoyed frequent visits from the kids and grandkids alike. Both Larry and Audrey loved to gather family from all over the country by hosting big family reunions year after year. In 2014, Larry’s health began to fail and on March 28, 2016, he succumbed to his illnesses. It was a hard time for Audrey and took a heavy toll on her.

At that time, her daughter Dawn moved home and became her lifeline; Dawn lovingly cared for her mother until her death. Audrey’s final years were not marred by pain or severe illness. She loved watching the Mariners and the Seahawks, and she also had a massive Bobblehead collection proudly put on display that her grandson, Tyler, collected for her. Audrey enjoyed her Gin and Tonic, which would usually lead to her expressing her gratitude for her “five wonderful children” over and over again.

Audrey passed away peacefully at her home on April 8, 2019. She had been surrounded by her kids and grandkids for a month, and she left knowing how deeply she was loved.

She leaves behind two sisters, Letha and Karen of Missouri and Westport, Washington. Her youngest sister, Kay, passed away on May 19, 2009. She also is survived by children Brad, Rusty (and wife, Missiel), Dondi, Wade (and fiancée, Andee), Wendi Stedham, Robert Morrison (one of Larry’s nephews whom she treated like he was one of her sons); ten grandchildren, Jakob, Joshua, Cassandra, Ryan, Tyler, Taylor, MyKalla, Novalee, Emersyn, and Vincenzo; and three great grandchildren, Jaxon, Jayden, and Machelira.