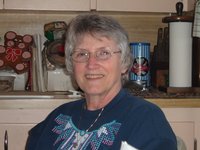 A 78-year resident of McCleary, Washington, Elsie worked as a utility clerk for the City of McCleary; secretary to the sheriff of Grays Harbor County Sheriff’s Office; and operator at Ventrol, Morton International, Rohm Haus, and Dow Chemical (all the same company sold many times).

Elsie loved to travel, and spent most of her retirement traveling the world.  She collected antique glassware and bears.  She was treasurer of the McCleary Historical Society, and volunteered at McCleary School, helping children learn to read.  She belonged to the Eagles, VFW, and Red Hat Society.

Elsie was queen of the left-handed comments.  Her favorite saying was:  “Two out of three ain’t bad!”

Elsie was a wonderful mother, grandmother, and great grandmother. She will be missed and lovingly remembered by her surviving sons, David L. Franklin, and his wife, Darlene, of McCleary, and William A. Franklin of Elma; daughter, Teri J. Franklin, and her husband, Blair Hansen, of Elma; seven grandchildren; and eight great grandchildren.  Elsie was predeceased by her parents; and brothers, Gerald Briner and Herman L. Briner.